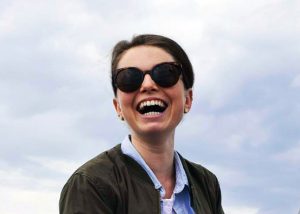 Abbey – Excitement for the Future

Prior to the blessing of grant funds provided from LymeLight Foundation, I had exhausted all financial means as a mid-twenty-year-old including my income, savings and was relying on loans to make payments for treatments. I was debilitated, unable to function and making zero progress toward regaining my health without access to resources.

My family lived on Cape Cod in Eastham, Massachusetts until I was three years old. In hindsight, my Lyme Literate physician speculates this could be where I first contracted Lyme disease from a tick bite. During that time, I ran unusually high fevers. From there my family moved to Naperville, IL. I became chronically sick with sinus and allergy issues. I started becoming anxious. During those years, I was given various antibiotics but when I finished each antibiotic, I was sick again immediately.

My first year of college, I started having cognitive problems and developed unusual fears and anxiety which led to seeing a psychiatrist and being placed on medication. By my junior year, I had taken gluten out of my diet and started seeing a therapist. I decided to train for a half marathon thinking I could get my body in shape and make things better. Running was therapy for me, and a way to escape when my body would cooperate.

I owe so much to the brilliant doctor who put all the pieces together. When my test came back positive for Lyme disease, I was simply given medicine for it without a formal explanation. The fact the doctor didn’t make it seem like a big deal was reassuring. The knowledge that life would go back to normal was a flood releasing stress and anguish.

Instead, once starting herbal treatment drops, I got horribly sick. I finished the medicine and was still sick. I trained for and completed a full marathon during which I started having problems with my hip when I ran.

I was offered a teaching opportunity to work with children with autism in Phoenix, AZ so I took it and moved in June of 2015. I took graduate school courses online through The University of Kentucky at night and taught full time during the day. Unfortunately, the stress of the new job, the move and the graduate work took a toll on my health like never before. I was barely holding on and felt like I was losing my mind. I was anxious, afraid of everything and couldn’t stand to be alone. I thought this was normal for a move across the country combined with a stressful job plus school.

I looked for Lyme literate doctors in the Phoenix area and was fortunate to be connected with a naturopath at Arizona Integrative Medical Center where I began ozone IV treatments. My money funneled straight into the treatments and supplements so I would get better and no amount paid would be reimbursed. The stress I was experiencing, mounted with the reactions my body endured to the treatments, left me barely functioning. In 2016, I moved home where my mother described me as fragile and a shell of myself. I could not function on a daily basis for weeks.

We began searching for a Lyme Literate physician in the Chicago area, but it is truly hard to find physicians who understand Lyme. My family and I drove to New York for an appointment was 4 ½ hours long, but they listened, took notes, understood what I was saying and they said those unbelievable words, “Abbey, you will get your life back.” We had a plan and we began moving forward. I had several tests, tons of blood draws and blood work, another trip to New York, emails with the doctor and phone consults. My system was not strong enough to begin normal treatment so I took the medicine they prescribed along with many supplements to arrive at the point where I could begin antibiotics.

Thanks to the generous grant provided to me, I have been able to receive treatment through a number of modalities, ultimately healing through six weeks of treatment at an institute in Naples, Florida, followed by 14 weeks of aftercare to heal my GI tract. Truthfully, prior to the provision of this grant I had lost hope of regaining a life of health and wellness I once knew as I was unable to access any form of treatment to help my body eradicate Lyme disease. I now have a renewed sense of hope, and excitement for my future, due to regaining my life. I find myself becoming overwhelmed with emotion at moments during the course of each day, full of gratitude for how far I have been able to come and for the blessing that made it possible. Thank you, from the bottom of my heart.