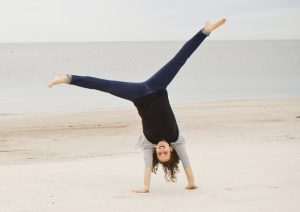 Bethany – You Gave Me Hope!

In May of 2012, my mother and I traveled to Pennsylvania for a weekend. Two weeks after we came back, I came down with a cold and a rash (but not a bulls-eye rash). I saw my doctor at the time, and he told me that while the rash didn’t exactly look like psoriasis, it was the best diagnosis he could come up with. He prescribed a steroid which caused the rash to clear up, and that was that.

In August of that year, my health began to deteriorate. I found myself feeling more and more fatigued and increasingly irritable. As the months progressed, I noticed digestive issues as well. In the fall of 2013, I moved to Nashville, TN for college and slowly began to deteriorate. It was getting more difficult for me to concentrate in class, I was having skin issues, and my digestive issues were worsening. For the next year and a half, it got worse and worse. I also began having significant joint pain, shortness of breath, and then I was diagnosed with POTS. By the time February 2015 rolled around, we knew we needed to do something about what was going on. Since July 2014, we’d tested for various autoimmune issues and vitamin deficiencies. According to the lab reports, I was in perfect health, but my body told a different story.

That March, I moved back home (Orlando, FL). I was able to finish the semester from home, although I was still having difficulty concentrating and finding the energy to get my work done. I spent the next few months in and out of different medical offices trying to find out what was wrong. After a failed round of supplementation, I began suspecting Lyme and made an appointment with a doctor who was Lyme literate and a Naturopath (LLND). He did more tests and started me on some different supplements. From those tests, we found out that I had systemic candidiasis and very high mycoplasma antibodies. My CD57 and C4a were also off, so suspecting Lyme, he had me try two different oral antibiotics. However, I wasn’t able to tolerate them, so after several weeks, I stopped. We did an Igenex Lyme test at that point, which came back positive for the 31 band. My doctor then suggested a course of IV Rocepin three times a week in combination with aerophyto therapy, a treatment that involves breathing diffused essential oils at a high quality/concentration. We began those treatments in October, and I saw a little bit of improvement as a result.

While I still have significant gut issues, joint pain, and fatigue, I’m able to drive again, and am generally starting to feel a little better. My heart rate also seems to be stabilizing. While I still have a lot of ground to cover and a lot of symptoms to clear up, my body has begun waking up to fight this infection, thanks to the combination of treatment and lifestyle factors.

I will forever be grateful to the LymeLight Foundation for giving me the strength, courage, and resources to seek healing. Hope is hard to come by when you have Lyme. When I didn’t have the capacity to continue seeking answers and treatment opportunities, LymeLight came along and gave me hope.

While my physical health is still struggling quite a bit, I can’t begin to describe how helpful the support of LymeLight has been for my mental and emotional health. This grant has reminded me that I am not alone in my fight with Lyme, and it’s given me the fortitude needed to keep fighting. Thank you!