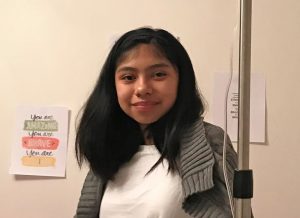 Malena has been battling Lyme disease, Bartonella and Babesia for at least seven years. As with so many, she lost her childhood. She was pulled from school in 5th grade and began virtual school. She has been hospital and homebound for the past three years. Lyme disease has taken a huge physical and emotional toll on us, along with all the financial issues. Had it not been for the grant from Lymelight, I don’t know what we would have done.

The grant allowed Malena to see a doctor out of state. We saw some improvement, but in the fall of 2017, things once again began to decline. I made the decision to take her to Germany for hyperthermia. We were then blessed by the help from wonderful family and friends which enabled us to go. We are thankful for the love and support of so many. Malena had two hyperthermia treatments. We got home right before Christmas in 2017. She felt fantastic.

But, within 4 weeks, she began regressing again.  She continued on the IV treatments she had in Germany and started SCIg but she continued to decline. She was having rages, night terrors, OCD, anxiety, headaches and leg pains again. We retested for Lyme, and it showed it was still in remission. After numerous additional tests, she has diagnosed her with Babesia, Bartonella and autoimmune encephalopathy. It has been a tough road.

We continue to fight this battle and see improvement every day. We have big hopes that she will be able to go back to traditional school in the fall. She was accepted into a magnet school for the performing arts, her talent is creative writing. I cannot thank you all enough for the help you gave us! Prayers of health for all Lyme Warriors and their families!