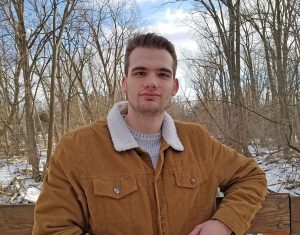 I’m not sure where or when I contracted Lyme. As with so many others, I never a saw a tick on me. I used to run through the woods barefoot by my family’s country house. Around 11 years old, I started developing frequent headaches, digestive issues, cognitive issues, and major depression.

Through the years, things got worse. I was eventually homeschooled and spent most of my time at home. In my later teens, I started having more issues such as joint pain, extreme fatigue, panic attacks, and I was even hospitalized for anxiety. I went through the mill of antidepressants, antianxiety pills, and mood stabilizers. At best, these drugs provided some symptom relief. I had no energy, was socially withdrawn, no interested in dating, and I didn’t care much about anything. I had tried joining sports like wrestling and football but could not keep up due fatigue. It became so frustrating because I could not live the life I wanted to live, this was not who I wanted to be.

In 2015, I was 23 and my parents were in the process of a divorce. I had recently transferred to a new college and felt my cognitive ability slipping more and more. I was forgetting due dates for my assignments, I couldn’t keep up with my course work anymore. Nothing made sense at all. My professor proposed a question and it was as if my brain was turned off. I sat there in silence and I couldn’t answer. This happened again and again until I had to withdraw from college. I saw a neurologist. After the standard tests, I was told nothing was wrong with me and that it was anxiety.

Eventually, I found a naturopath who diagnosed me with Lyme. I started to learn as much about Lyme as I could and I went through homeopathic therapies. I had mild improvements but decided that I needed more aggressive treatments. I had very little money for treatments and it was just my mother and me trying to get by. I tried a “Go Fund Me” campaign and only received help from my aunt and another Lyme sufferer I connected with. Most of my family did not believe me and thought it was just an “anxiety” issue. I then found out about LymeLight and told them my story.

In March of 2017, I received my first LymeLight grant. I was very happy and thankful as I finally had hope to get better. I went to the Lyme specialist in New York, who found I not only was I dealing with Lyme, but Bartonella, mold toxicity, and a host of undiagnosed food allergies. I began antibiotic treatment that would last over a year. I also used my grant money with a naturopathic genetic specialist doctor who helped me with detoxing and learning about my unique genetic makeup. The protocols through him really helped me get through a year of antibiotics.

After my treatment in New York, I switched to a local integrative psychiatrist who works with Lyme patients. I’ve seen so much improvement with her. I’ve been able to start college again, am working on my bachelor’s in business and I’m doing well. I still deal with symptoms while herxing but despite this, I’m getting better. The fact that I’m back in college and able to get my assignments done is amazing to me. There were times I didn’t even think it was possible. When I’m healthier, I plan to do an accelerated nursing program after my bachelor’s. I want to get into healthcare and give people hope the way LymeLight has given hope to me. I’m involved with my local Lyme support group and I’ve made some great friends that are struggling through the same experience. I’m dating a girl now who has been very supportive of me throughout this process.

I’ve progressed so much from where I was three years ago. It would not have been possible without LymeLight. LymeLight gave me hope when I had little to none. When friends, my doctor, and even my family thought it was all anxiety, your organization believed me when I was legitimately sick. I am humbled by your generosity. From the bottom of my heart, I thank you so much.