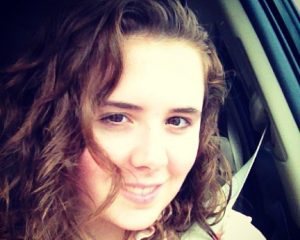 Sarah – Hope for the Future

My daughter, Sarah, lost her entire childhood due to Lyme disease. Since birth, she has endured endless neurological and medical problems, including global developmental delays, mild seizures, food allergies, severe colitis, and Pediatric Acute-onset Neuropsychiatric Syndrome (PANS), an autoimmune disease triggered by strep and other bacterial and viral infections that causes neuropsychiatric symptoms. As we treated with antibiotics, supplements, IVIg infusions, and diet, and searched for other underlying infections, we unraveled one underlying infection after another that was triggering the constellation of symptoms leading to these diagnoses.

Following a two-week hospitalization in 2010, we tested for Lyme disease through IGeneX. The test results came back positive and Sarah began a new course of treatment. Based on her history – and the test results – her doctors believe she had Lyme for years.
As a young girl, I found a tick deeply embedded in my head. It was not until my twenties that I started experiencing migrating joint and muscular pain, walking pneumonia, chronic bronchitis, and foot pain. Years later, following Sarah’s diagnosis, my IGeneX test came back positive for Lyme. Within months of starting treatment, we were both diagnosed with Bartonella. I believe I gave these tick-borne infections to Sarah congenitally.

After two years of intensive treatment, I have been in remission ever since. Sarah was not so lucky. Instead, she has grown progressively worse over the years. She has been in and out of the hospital, suffering from severe mental health issues. Last year, she was diagnosed with Babesia and Hashimoto’s disease. With every treatment, her health and emotional state declined. We tried rotating antibiotics, antimicrobials, antiparasitics, herbs, and supplements.

Last year Sarah had to withdraw from school and is now two years behind. She is unable to do any home tutoring and has cut off all ties from the outside world, including friends, clinicians, and family members. She is in bed 24/7 and cannot leave home except for medical appointments. She is no longer riding horses – the one great passion in her life – and is unable to read, exercise, crochet, do crafts, see friends, or do any of the activities she used to do. She is a prisoner of this insidious disease.

Then, three months ago lab tests confirmed mold toxicity to trichothecene mycotoxins. Combined with the fact that her body is unable to detox, we think this is why Sarah is unable to clear the tick-borne infections.

I had to dig deep into my retirement account to pay for Sarah’s medical treatments and was so pleased and grateful to receive this grant! Now, with support from LymeLight Foundation, Sarah can have the IV infusions she needs to clear the mold toxicity and tick-borne infections.

For the first time in a very long time, Sarah has hope for the future!