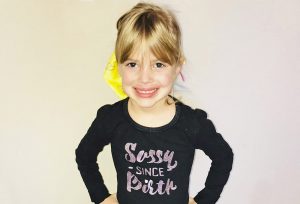 After receiving the news that Stella’s older brother was positive for Lyme disease, we had Stella tested as well. She was 2 1/2 years old at the time. It was very difficult to determine if she had abnormal neurological behaviors, or if her behavior was just age-appropriate for a two-year-old. But when her lab test came back positive for Lyme disease, we really weren’t surprised. We also discovered that, along with her brother, her dad and I also tested positive for Lyme. With the help of the LymeLight Foundation grant we immediately began treatment. Over the next year Stella received antibiotics, antivirals, antifungals, numerous supplements, immune system boosters, and mitochondrial disorder medications.  The grant also allowed us the opportunity to travel, an 8-hour drive, to see our Lyme doctor whose visits were not covered by insurance.

Fast forward to now…Stella is a thriving six-year-old who rarely has a flare-up. We are very thankful to God for the LymeLight Foundation, which provided the grant for us to pursue aggressive treatment for Stella.