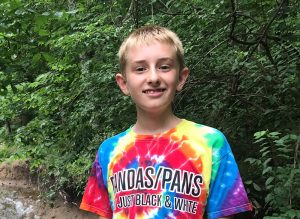 Brayden – A Journey Toward Hope

When I was asked to write Brayden’s story of hope, I really struggled with where to start. Brayden is our oldest child, now age nine. As our first born, we were assured through the years that his early struggles were normal and he would outgrow everything from constant strep infections to an eating disorder. Never in a million years could we have imagined that he had been infected by the Lyme bacteria.

Jump forward to 2013, Brayden developed an autoimmune encephalitis known as P.A.N.D.A.S.  After visiting two different doctors and attempting two different treatment approaches, Brayden became immune compromised and his encephalitis was not improving. We were encouraged by our various support groups to test him for Lyme disease. I will be honest to say that I knew nothing about Lyme disease and had no idea that it was the source of the infection for not only Brayden but also my two other children.

In February 2014, we sought out the closest well-reputed LLMD, with an office just under four hours from our house. We took all three of our children to this doctor and Brayden was diagnosed with Lyme disease, immune deficiency, P.A.N.D.A.S. and eventually WA-1 Babesia.  Our first appointment for all three children took seven hours at the rate of $330.00 per hour. Little did we know that this was just the beginning of our financially and emotionally draining journey.

It is important to note that the years prior to finding Lyme disease, Brayden battled malnourishment, constant infections of unknown sources and severe OCD/anxiety. He was unable to attend school and often couldn’t leave the house. He longed to have friends but socializing was torture for him. His brain was inflamed but no one knew why.

By the time we found our LLMD, Brayden struggled to get off the couch due to debilitating fatigue and wasn’t eating anything other than Gogurts and applesauce pouches. The initial stages of treatment were very frustrating. Everything cost so much and with an $11,000 deductible, we had to pay cash for every prescription, supplement and doctor visit.  Brayden was unable to swallow pills or capsules so everything had to be compounded, which wasn’t covered by insurance and costs additional funds.

By April 2014, we were ready to give up hope. Brayden was not better and we were running out of funds. At this time, his mother became very ill from what was found to be Lyme. This further set back the family’s treatment progress as we felt the need to delay follow up visits and skimp on supplements.

In August, 2014, we had a breakthrough in treatment with Brayden! At this point, we had discovered that all our biomedical interventions which included amino acid blends, specially formulated, compounded B12, and various other supplements, had led to significant weight gain. Our son had gone from malnourished to gaining 15 lbs!  Earlier in July, a newer medication was implemented that worked much like the IVig we had been avoiding. We were starting to see results! Brayden tried his first vegetable in over 4 years! He ate his first fruits in over 3 years. He was like a toddler anxious to try all these new foods. He had energy and wanted to be out in his community. We were elated by his progress despite the financial ruin the interventions were causing. Then the LymeLight Foundation grant came through and renewed our hope.

The debt we have incurred will take years to recover from and it seems never ending. Although we met our insurance deductible this past July, the supplements, doctor visits and many compounded medications are not covered and continue to take a toll on our finances.  In December, our current insurance policy will be canceled and we will have to apply for a new one. Given our medical history of the past year, we are preparing for a triple increase in our policy cost with the same deductible. Our financial future remains uncertain but Brayden’s future is much brighter with the interventions our LLMD is able to provide.

The added complexity of P.A.N.D.A.S. has led to many setbacks in treatment for Brayden. We are so grateful that the LymeLight Foundation grant has given us funds to continue his current supplements and medications. As an immune compromised child, Brayden’s battle will be ongoing and possibly be lifelong. We are so thankful for the support we have found in the Lyme community to help us battle this disease and bring awareness to those around us who may not have had the successes we have had. We appreciate everything we have been given so far. Brayden’s journey is long but he is not alone.

Happy update on Brayden:
Brayden has been doing amazing. He eventually needed IVig infusions and continues to receive them every 6 weeks. This treatment has broadened his ability to eat every food possible. There is no food he won’t eat, which I never thought possible. He started martial arts in 2014 and had many setbacks due to illness. But he pushed through and with ongoing treatment, he will now receive his black belt in Kyuki-Do in November 2017. He has also competed at four different tournaments with amazing success.