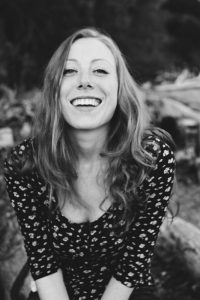 Erica – The Light of Hope

Hi everyone! My name is Erica Cooper. I was officially diagnosed with Lyme disease when I was 24 years old, I’m 27 now. I would probably not be writing this if I had not been diagnosed in 2011 by an amazing doctor named Paul Anderson in Seattle. I’m not sure how or where I contracted Lyme disease, I did get bitten at 6 years old in NH. I never got a bull’s eye rash. All I know is around 7 years old my body started feeling different.. I first started noticing symptoms in my ballet class, I noticed I was getting tuckered out, out of breath and my leg was shaking uncontrollably whenever I tried to hold it up. Around 14 years old I suddenly developed anorexia. It was like a switch went off in my brain. In high school I was plagued by severe social anxiety, panic attacks every day in the lunch room and thoughts of suicide. I have always been a go getter type person so I powered through and kept dancing until one day I realized my body could no longer keep up. My main love and passion in this life has always been music and dance. I went to college at Cornish College of the Arts in Seattle as a vocal major. Half way through college my health started to deteriorate rapidly. I started having severe stomach pain to the point where after eating anything, my stomach would go into spasm. I became very paranoid and self-conscious, I would whisper while practicing singing and boarded up my apartment door because I was so afraid. As you can see, my Lyme symptoms really started for me in my brain.The main physical symptoms I experienced was severe bladder and pelvic pain.  One day a year after I graduated from college, I woke up in the morning and kept fainting. I fell on the floor and my cat kept licking my face. I was in and out of consciuosness but I got it together and I called 911. They said I would have died had I not called them. I know my cat saved my life by licking my face so I’d stay awake to call. I stayed in the hospital for a few days and was given  IV antibiotics. I felt good as new. With this “new” energy I started learning about audio, engineering, and music production. I was lucky to meet my producer, Alek Edmonds. I am a singer-songwriter and piano player. He agreed to produce my first album. I was extremely excited about this opportunity so I worked as hard as I could. About halfway through this process, it was evident that there was something extremely wrong with me again. All of my symptoms came back with a vengeance. I was living in level 10 pain all day and every day but I was so driven with my music that my parents had to intervene and eventually after seeing about 20 doctors, I finally got a proper diagnosis from Dr. Anderson. Prior to him,  I had gone to the best G.I. doctors, urologists and psychiatrists and no one could figure out what was wrong with me. I felt so incredibly grateful to get a diagnosis that explained exactly what I had been going through most of my life. Little did I know then what I was embarking on, the elusive road to health. I was stressed and worried because of the financial burden my family was going through trying to get me well. My insurance plan covered almost nothing. I reached out to LymeLight and they so graciously gave me a grant to receive treatment. I went to several Lyme literate doctors but I ended up at the Sophia Health Institute with my amazing doctors Christine Schaffner and Dietrich Klinghardt. I am like a human guinea pig! Please believe me when I say I have tried everything. I was so committed to getting better that I would literally do anything. Because I am a stubborn, obsessed, go-getter, I decided to finish my album while undergoing treatment. I’ll tell you that was probably the hardest thing I’ve ever done. Many days I was  unable to drive. My parents drove me to the studio and I worked for hours. My main inspiration throughout all of this was to give hope to the little girl inside of me and to all the children and adults suffering from this disease. That little girl was determined and would never give up on her dreams. My album Safety Escape will be released April 29th, 2017. I still have to do treatment, I’m big on self care but I don’t live in severe pain anymore and finally I’m exited about the future. Thank you so much LymeLight! I am so blessed, thank you for sharing your Light with me.