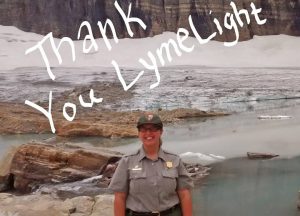 My passion is nature and I love to teach kids in the outdoors about how to protect our earth. Unfortunately that also brings me in close contact with tick infested wooded areas. In October 2013, I was bitten by a tick while I was working in Massachusetts. About a month later I started having severe headaches and insomnia. Every month after that another new symptom would surface. I developed severe muscle aches, joint pain in my knees, elbows, and hips, to the point where I could barely walk. Next came severe fatigue, constipation, tingling in arms and legs, stiff neck, abdominal pain/bloating, and food and chemical sensitivities. I noticed that my symptoms were occurring on a monthly cycle, so my MD thought it was a hormonal imbalance and stress. Now I know the infection was exploiting my weakest link–my hormonal system. After nearly a year of suffering, many doctors and misdiagnoses, and taking time off from work, I finally found a doctor in New Hampshire who diagnosed me with Lyme and Babesia coinfection.

While I was relieved to have a root cause of my problems, I also knew the devastation that Lyme could wreak on someone. I grew up watching my older brother battle Lyme, get better, and then completely go downhill again. So I had a great deal of fear going into my own healing process. I had to call on my perseverance and the support of family and friends to get me through the darkest days of my illness.

Being a seasonal park ranger and outdoor educator, I was living far away from my family and spending the summer months in one state and the school year in another, which made it impossible to get good health insurance. I started treatment that included many months of antibiotics, which helped initially, but then made me worse. I learned that my body was extremely sensitive and not strong enough to handle more antibiotics.

I began to look into to the idea of alternative treatments as an option. I was fortunate to find a doctor rather quickly who was willing to use a more natural protocol. We tried herbs, supplements, and essential oils which got me to a much better place. However, my worst symptoms were digestive issues and the treatments were not as effective as they could have been because I wasn’t detoxing properly. My new doctor was the first person on my healing journey who actually listened to me, supported me in developing my own body intuition, and was willing to try many treatments.  You can image how devastated I was when I realized that my funds for my healthcare needs were dwindling since I had to pay out of pocket for every appointment, test, supplements, etc.

That’s when I found the LymeLight Foundation. I’m so incredibly thankful for LymeLight and their donors who have allowed me to find treatment that actually works for my body. I’m in such a different place than I was before the grant. I have been able to buy a portable Infrared sauna to help with detoxing, a Biomat for pain relief, and I regularly receive IV ozone therapy and nutritional IV therapy. With the help of these treatments, I was able to hike this past summer for my job! The highlight was reaching the top of a special hike. I had visualized this on the days when I was stuck inside because my body was in too much pain to do anything but rest. Achieving this goal was like stepping back into my body, but I had an entirely different perspective of my favorite place!

I still have a long way to go in terms of healing, but I already feel that this journey has given me so much opportunity for personal growth. The next dream I have started to visualize is one day attending nutrition school and becoming a health coach, so I can help people dealing with Lyme and other chronic illnesses reach the best versions of themselves.