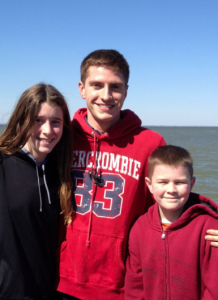 I have come a long way since February 2014 when I became sick. This past October 1st marked 1 full year of antibiotic therapy for Babesia and Lyme disease. For the past three months, I have been treating Bartonella and Lyme. My head pressure is slowly improving and so is my heart pain. My other 20+ symptoms still persist, especially the fatigue. For the past two years there have maybe been 20-30 days of being headache free.

I have seen over 15 doctors, including a cardiologist, infectious disease doctors,neurologist, all indicating they don’t believe I have Lyme disease and co-infections. My Lyme doctor was the only person smart enough to text me for not only Lyme, but also co-infections. For the past year, thanks to the LymeLight Foundation, I have been able to see her and purchase antibiotics and supplements, which have been a tremendous financial help during my treatment. After paying for blood work each month to monitor my liver and kidney enzymes while on antibiotics, doctor visits, medicine and herbs, my finances are pretty much depleted and I am relying on my grandmother at the time being, as well as further grant money.

I can no longer trust doctors unless my LLMD makes a referral, and even if she does that, we are still both wary. I am in over $30,000 dollars worth of medical debt. Insurance denies me every single time. I have been through an unneeded Balloon Sinuplasty surgery and “deviated septum” operation which an ENT told me was causing my symptoms and that I needed. I never had any sinus drainage sneezing or runny nose, just pressure. I was a cardiologist who said I needed a stress test and echocardiogram. Every doctor told me I needed a CT scan even through they knew I just had one, exposing me to vast amounts of radiation. I was put on prednisone which lowered my immune system and let the Lyme run rampant through my body. After the prednisone is when 15+ other symptoms started. I had a dentist tell me I need my wisdom teeth out and that was causing my headaches. An allergist told me I had chronic allergies and said I needed allergy shots which costs $2,000 alone and I had no idea it would be that much. I had two neurologists tell me I needed an MRI and MRA. I had a chiropractor tell me it was my neck causing my symptoms. I had a primary care tell me I had anxiety. I had another neurologist tell me I need to seek counseling. I had another primary care tell me I need sinus sprays. I’ve been tested for everything known.

I am still unable to run or do things I used to be able to do. Typing this right now takes a ton of energy. The little things in life have turned into hard things. I am still thankful that my cognition has not been severely affected. I am hoping it stays that way. All I want is to be able to reach a point in my health where I am able to go out and experience life again, go back to school, to work, and start a family one day. Remission would be wonderful, but I know that is a very long road ahead.

I just want it to be known that to whoever is donating, you are helping people survive this illness and are giving many young people such as myself hope to hang on. I hope my story shares some light on how bad it is out there in the medical community with Lyme disease and shows a way how people are suffering. Thank you so much for letting my voice being heard.