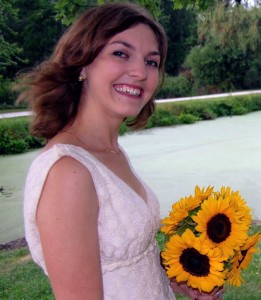 Shelby – A Ray of Hope

My life changed dramatically when I got sick. I am not the same person I was before I contracted Lyme disease. While my battle with this illness has been extremely difficult, I have also grown in positive ways as an individual.

I was 17 when I first started experiencing symptoms. Before I became sick, I had a very active life. I loved swimming, hiking in the Santa Cruz Mountains and playing water polo. One day I fainted while working out and was rushed to the hospital. The doctors told me I had heat stroke and should rest up for the day. My life changed after that; I began to experience migraines, pains all over my body and brain fog. I saw specialist after specialist trying and figure out what was wrong with me. I was diagnosed with chronic migraines, Osgood Schlatters disease, Fibromyalgia and was told that it was, “all in my head”.

My symptoms kept getting worse so I decided to pursue my own diagnosis. I learned about Lyme Disease and how many illnesses it can mimic. Growing up in the Santa Cruz Mountains I had, of course, been bitten by ticks. I pushed to be tested for Lyme Disease by Igenex Labs. A few weeks after taking the test a man from the lab called and strongly recommended that my family and I find a Lyme literate physician. I met with a doctor who explained I had tested positive for Lyme disease. I began treatment and soon some of my symptoms started going away!

It wasn’t long before the symptoms that went away began coming back and I started getting worse again. I found a new Lyme doctor who explained that I had severe neurological Lyme and that we should look into IV antibiotics.

My family and I had had no luck with insurance covering any of my treatment and I began to worry about the costs of this new treatment recommendation. That is when I discovered the LymeLight Foundation, maybe I could afford this treatment without affecting my family. I sent my letter to the Foundation thinking of all of the ways the grant could change my life.

The day I learned I had received a grant, I felt like I was in a dream. I kept waiting to wake up, but it was real. Since receiving the grant have been able to start IV antibiotics and a whole new treatment protocol to help with my neurological symptoms.

I hope to see dramatic improvement in my health within the next year thanks to the LymeLight Foundation! My goal is to become a Nurse and to work with special needs children. I would also like to become an advocate for Lyme disease patients.

Words cannot express how thankful I am to LymeLight. This is a truly amazing Foundation that will continue to be a very big part of my life.