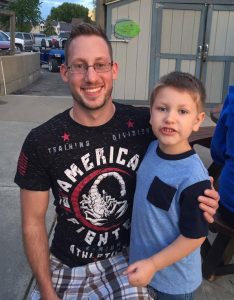 Eric – Whatever It Takes!

My name is Eric Casper, I’m 25 years old and this is my story. It all began when I enlisted in the U.S. Army in 2009. I was in good health and was set to deploy to Ft. Knox, KY on May 5, 2010. I had trained hard every day to become the best soldier I could because I was joining the Cavalry Scout, which is the most dangerous and elite MOS in the Army. This was my dream and was going to be my life until retirement. I arrived at Ft. Knox ready and eager to begin OSUT for 16 weeks. However, after about a month I became incredibly sick. I had pneumonia and felt horrible but I continued training because I didn’t want to give up. Then after 2 months, I started experiencing pain in my legs. It started getting worse and traveled to other parts of my body. I knew something wasn’t right, but the Army doctors told me I was just faking it and even sent me to JAG court where my rank and pay was taken away for apparently faking an illness to get out of duty.

Then after failing several P.T. tests, I was discharged and sent home in October of 2010. Once I was home I started seeing doctor after doctor and nobody knew what was causing these problems. Then in 2013 a doctor suggested I had Lyme after describing all my symptoms to him. I did a western blot test and it came back positive for Lyme disease. I started seeing a specialist for over a year undergoing treatment options with pills that didn’t work and then a PICC line with different antibiotics. None of these helped and the doctor was out of options. I was depressed that I went through all that treatment and spent over $5,000 just for the I.V. treatment.

Now I’m seeing another doctor for an alternative option which unfortunately isn’t paid for by insurance, but I’m willing to do what ever it takes to be healed and be able to move on with my life even if it drives me into debt. If it wasn’t for the grant I was given by LymeLight Foundation, I would have never been able to get any kind of treatment at all. Thank you for all you have done and I hope I will be cured soon. With my sincere thanks!