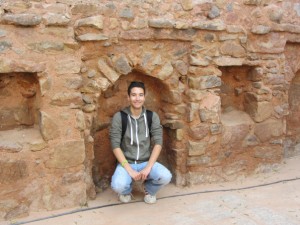 In January of 2012, 24 year old Ari found himself settling into a hospital room in New Delhi, India, preparing to embark on an exciting and promising journey toward a healthier life. Ari had spent a decade battling chronic illness; he spent nearly his entire childhood and teenage years in bed, dreaming of better days. As Ari unpacked his bags to the tune of New Delhi’s bustling streets, he reflected on his past 12 years and was grateful that his challenging path had led him to India. Just a few months before, while lying riddled with pain and nausea in his bed at home in California, traveling to India for stem cell treatment was a mere distant wish. He didn’t dare imagine that in a matter of months, he would be sitting atop a hospital bed in New Delhi, preparing for the Human Embryonic Stem Cell Transplant that would hopefully mark the beginning of his journey to wellness.

Ari’s battle first began in 1999. As an inquisitive and vibrant child, Ari began exhibiting uncharacteristic symptoms that rapidly progressed into alarming debilitation. Though he had always loved going to school and flourished in an academic environment, he began experiencing such profound fatigue that he was unable to rise from bed to attend. At times, he experienced weakness that left him unable to even lift a spoon to his mouth. As the pain and debilitation failed to subside, it was clear that something was terribly wrong. Further complicating the struggle, Ari’s younger sister Dannie began to show symptoms shortly after Ari became bedridden. Debilitating pain spread like wildfire throughout Dannie’s body, leaving Ari and Dannie’s single mother to solely care for two incapacitated and frighteningly ill children. Over the next 5 years, Ari and Dannie saw a total of 23 doctors, none of whom could explain their downward slide or offer any solutions to their progressively deteriorating health.

Finally, after a myriad of appointments, tests, misdiagnoses, and unexplained symptoms, one of Ari and Dannie’s doctors concluded that their ailments were due to toxic mold exposure. This exposure resulted from a pipe that had burst in their home in 1999 causing their home to flood. In order to heal, Ari and Dannie’s family had to live in a hotel, and then subsequently rebuild and sell their home leaving behind all of their exposed belongings. Ari and Dannie’s mother quit her job in order to care for her children as they struggled to regain their health. However, when funds from the sale of the house were depleted, Ari and Dannie’s mother returned to work, working two jobs to keep the family afloat and allowing them to seek medical treatment not covered by insurance. In spite of this, Ari and Dannie continued to worsen. After appropriately addressing mold toxicity, their doctor suggested that they undergo testing for Lyme disease and co-infections. The tests came back positive for both children. Ari found hope in his diagnosis of Late Stage Lyme, knowing it would provide guidance and open up new treatment options that might allow him to resume life as an ambitious teen. However, as Ari and his family quickly learned, properly treating Lyme disease would launch them into a new battle of an entirely different caliber.

Over the following years, Ari and Dannie underwent aggressive and comprehensive treatment for Lyme disease. For Ari, each year provided a few steps forward and excruciating steps back, as he rode the roller coaster that can often characterize treatment for complicated cases of Lyme. After 6 years of treating the persistent chronic infection with IV antibiotics and a myriad of alternative therapies, it became clear that Ari needed to seek out restorative treatment for the damage that mold toxicity and Lyme disease had caused. After much prayer and endless research, Ari and his family discovered stem cell therapy in India as a potential solution. They found immense hope in the treatment’s healing potential. Ari has stated that “stem cells are able to repair the neurological damage that is caused by Lyme disease, encephalitis and myelitis. As stem cells do not eradicate Borrelia (the bacteria that causes Lyme), the treatment we have received up until now has been necessary in treating the disease. However, we are both suffering from the systemic damage that was caused by the Borrelia and its co-infections…stem cell transplant will correct the damage done by the infection, returning us to a higher level of functioning and enabling us to re-enter life.” Although Ari and Dannie’s mother continued to work two jobs often leaving Ari and Dannie to spend countless hours alone in bed, they were barely able to cope with the mounting expenses. Their dream of traveling to India for restorative therapy was therefore out of the question. It was an expense that they could not face on their own.

So, they prayed. They hung tight to their unwavering faith in God and found comfort, strength and promise in His word. In 2011, their prayers were answered. A group of benevolent friends motivated by Ari and his family’s dire needs came together to help them raise funds for stem cell treatment. They launched a website, helparianddannie.com, and filmed a video revealing their story. Touched by the incredible heart that this family possessed, and moved by their ability to continue to dream despite relentless suffering, a community rose to support them. LymeLight Foundation joined the team by granting Ari and Dannie funds for treatment. By January 2012 Ari was able to embark on his voyage to India to begin stem cell therapy.

January 6th, 2012 marked Ari’s first official day in India. He quickly found that each day would be spent dedicating every moment, and all of his strength, to healing. He received stem cells through various methods (nasal drops, intramuscularly, intravenously, via spinal catheter) as well as intensive physio-therapy sessions. By February Ari was able to confidently assert that his chronic back pain, something he had experienced at intolerable levels every day for years, had nearly diminished. He was also able to stop taking many of the medications that he typically required just to have the energy and endurance to get out of bed. By March, Ari’s energy and lack of pain was astonishing. He was able to go to the gym, socialize with new local friends, explore India and begin experiencing life as a young adult. Ari returned home May 1, 2012 with the knowledge that his first round of treatment was complete. Ari learned that he would need a total of three rounds of treatment (three trips to India) in order to maximize and maintain the therapy’s potential.

Today, Ari continues to experience significantly less pain and has many “productive hours” each day. He generally experiences increased energy and has begun to piece his life back together bit by bit. Ari is focused on establishing himself and taking part in the community once again. This in itself is astonishing as in prior years, merely getting dressed was a Herculean feat. However, Ari still faces a level of physical challenge. He has good days and bad days, and still has a ways to go on his path to health. Ari hopes to raise enough funds to return soon for his second round of treatment. The same dedicated group of benevolent friends continues to work hard on fundraising to make this happen. LymeLight Foundation is proud to be part of Ari’s inspiring journey and is looking forward to watching Ari’s life take shape. Ari continues to hold onto his aspirations; he would like to complete school with an MBA, has an entrepreneurial spirit with abundant ideas, an interest in product design and development, and he possesses a strong desire to play a role in resolving local homelessness. He also hopes to be able to marry someday and start a happy, healthy family of his own. Ari has immeasurable gratitude for those who have stood behind him as he reaches for his dreams: ”I am now well on my way to recovery and have a new hope for a full and productive life. My sincerest thanks to LymeLight and its contributors!”