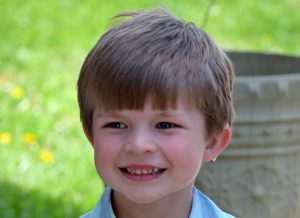 Colt – Hope in Our Hearts

Our Lyme story for Colt starts with my oldest son, Brody, being diagnosed with Lyme disease in May 2014. During that appointment with our LLMD, I expressed my concern about the entire family needing to be tested because we all showed various Lyme symptoms. The following month we received the results. Colt tested positive for Lyme disease along with Rocky Mountain Spotted Fever.

Colt has always struggled with severe hearing loss in both ears and was diagnosed with EVAS (enlarged vestibular aqueduct syndrome). At age 2 ½, he was fitted for bilateral hearing aids. Colt has struggled with chronic illnesses. He often had to be on multiple rounds of antibiotics to see improvements when ill. Colt is also developmentally delayed and suffers with receptive/expressive language disorder. He often has meltdowns, which lead to self-injury and only further puts his hearing loss at risk.

Being diagnosed with Lyme disease was the missing puzzle piece to Colton’s issues. We now have a glimmer of hope that treating his Lyme could restore some of his hearing loss. ). Thank you to LymeLight Foundation for the grant that enabled us to treat Colt for Lyme disease. His doctor’s mission is to stop the progression of the hearing loss with possible restoration. I can’t tell you the amount of hope this mission provides. We always had in the back of our minds that our son might one day be deaf (with only a possibility that cochlear implants could help). Now we have another possible remedy that we never knew about, until now. We have hope in our hearts!