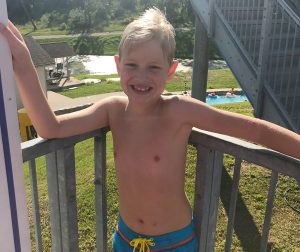 Jackson – A Much Better Life

Jackson was diagnosed with autism at the age of 2 1/2. Through speech therapy (OT/ABA), we saw his autism symptoms slowly improve. However, at the age of four, Jackson started having rage and behavior issues, unusual OCD, and anxieties. The Warrior Mama in me began researching, daily for many months, until I finally realized that Jackson had PANDAS. It made so much sense to me since his autism symptoms would increase whenever he would catch strep throat. We went to see a specialist in our community who specialized in PANDAS. He started Jackson on oral antibiotics and he slowly started to improve.

I continued to do research, as well as, talk to people on Facebook who were knowledgeable about PANDAS. Eventually I came across information on Lyme-induced autism and couldn’t help but think that was what was wrong with my child. I mentioned to our doctor that I wanted Jackson tested for Lyme, and he said I was crazy for thinking Jackson had Lyme disease; nevertheless Jackson was tested. Sure enough, the test came back positive for Lyme disease and several co-infections. Since the doctor we were currently seeing was so negative and undermining, we reached out to a doctor, eight hours away, known for treating Lyme disease and PANDAS, especially in children. We had our first appointment with him, and he immediately started Jackson on an aggressive treatment plan.

The financial burden that fell upon our shoulders was overwhelming. During the first three months of Jackson’s treatment, we decided to test our younger child who was showing similar symptoms and she tested positive for Lyme disease as well. I had learned enough about congenital Lyme disease that I had myself tested and, of course, I was positive, as was my husband. The treatment was much more important for our children so we applied to LymeLight Foundation for treatment grants and thankfully both received grant funding.

The following two years of Jackson’s treatment were very overwhelming and were a roller coaster of improvements and setbacks. Jackson was on so many medications and supplements that it was hard to keep up. Antibiotics, antivirals, antifungals, immune system boosters, mitochondrial support, detox protocol, many vitamins and supplements to help improve his overall health. Between lab tests, follow-ups with our Lyme literate medical doctor every six weeks, and sick visits along the way it was very costly. Without the help of the LymeLight Foundation, getting treatment for our two children would have been impossible.

Jackson has improved tremendously. He is no longer on antibiotics as his immune system is able to tolerate normal exposures to illnesses, bacteria and viruses. He still takes immune system boosters and does detox therapy and he has been receiving subcutaneous immunoglobulin therapy for the past eight months. He has gained physically, as well as, emotionally and cognitively. I truly don’t think he would have been able to tolerate the immunoglobulin therapy if it hadn’t been for the two years of aggressive oral antibiotic therapy. If it were not for the LymeLight Foundation and their generosity, Jackson would not be as healthy as he is today. Don’t get me wrong; it is a day-to-day illness that we have to keep up with. I watch him like a hawk for symptoms. But thanks to the LymeLight Foundation, we can finally breathe again, and we are confident our son will have a much better life.