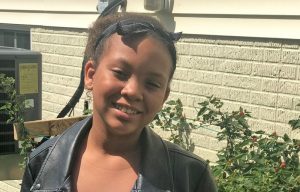 Vivienne was bitten by a tick when she was two years old. She went through years of treatment trying to fully recover. She was able to maintain a normal schedule but fatigued easily. She had a joint pain and fevers that slowed her down.

Then in the middle of her third-grade school year, Vivienne was bitten a second time while playing during recess. This time, she was bedridden. She had neurological Lyme that caused dizziness, migraines, extreme nausea, and extreme fatigue. She was homebound for the second half of her third-grade year and also for her fourth-grade year. Antibiotics and herbal protocols helped slightly, but the side effects were so bad, it made life very difficult.

A couple months into homeschooling, we received an email from LymeLight sharing about a relatively new treatment called LymeStop in Idaho. I had never heard of it, but was open to new ideas. We were desperate. With the help our LymeLight grant, we flew to Idaho for LymeStop treatment. Within a week, she was a whole new kid. She had a sparkle in her eyes.

It has been three months since the original treatment and Vivienne has continued to make progress. For the first time, we finally have hope. Now Vivienne is able to walk without severe fatigue and is even taking swimming lessons! With the funding from LymeLight and the expertise from LymeStop, I truly believe my daughter will get her life back. She is registered to go back to public school in the fall and now has a busy social life. She plays with neighbors and her cousins almost every day and is learning to draw anime. Thank you so much for your support and your generosity.