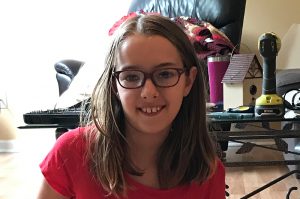 I remember the day clearly in January 2014. My husband and I sat in our integrative physician’s office in Franklin, Tennessee waiting for our visit to start. A nurse came in and handed me Teagan’s IGenex results.  I saw the positive reading and the emotions came pouring through. In one sense, there was immense relief to have an answer and on the other hand, fear over the unknown. Lyme disease was new to us and we didn’t know what to expect. The doctor came in and reviewed her progress, or lack of. He said her Lyme results suggested exposure but he would not treat it. We left the office angry and confused. Our daughter had been struggling for months on end with severe joint pain, countless headaches, and behaviors that easily warranted psychiatric medications. She had already received the diagnosis of Pediatric Acute Onset Psychiatric Disorder (PANS) caused by various pathogens. We had treated those pathogens including HHV6, Coxsackie virus, strep, and parasites. It seemed like Lyme disease was the missing piece of the puzzle, because we knew that joint pain and headaches were not part of her PANS diagnosis.

Upon returning from that appointment, we scheduled an appointment with a well respected LLMD, PANS and autism doctor. Our daughter did not have an autism diagnosis but only because we hadn’t pursued one. She was unable to socialize with peers, engage in cooperative play, break away from her rituals, or excel in academics. She was not always that way. She was a bright and eager to learn toddler. We kept hoping that there was something inside her brain, just waiting for the right treatment, to restore the bright little girl we knew. Every once in awhile, we would get a glimpse of what that might be and that gave us hope.  On February 6, 2014, her LLMD diagnosed Teagan with Lyme disease and her journey to recovery began.

From February through May, the only progress we noticed with Teagan was the resolution of her joint pain. Her behaviors remained unmanageable and it was clear her body was miserable.  Teagan’s doctor decided in May to try a drug called Actos.  This drug was new in the treatment of Lyme and PANS but had great success for many of his patients. We agreed to give it a try. Two days after starting the Actos, we had a different child. The Teagan we knew was hiding behind the pathogens in her body began to emerge. She woke up each morning eager and excited to attend school. She came home claiming to have arranged a play date with a school friend.  Since she often lived in a world of imagination, I shook this off until her friend called and the play date occurred. She was engaged and interactive with her friend. She began reading at school and paying attention. Everyone noticed a different child.  After about two weeks of progress, Teagan slowly began to backslide.

More testing was ordered and changes were made. We discovered Lyme had attacked her metabolic system and thyroid.  Slowly various systems of her body were not functioning as they should, all leading to psychiatric type symptoms.  Each time a new treatment was added, Teagan would show progress only to have that progress be sabotaged by a virus or other unknown pathogen.  In the past few months, we have had several periods of the Teagan we know who is hiding behind the Lyme bacteria, but sadly we often lose that progress. Teagan’s journey will likely be long and expensive. Every visit with her LLMD cost hundreds of dollars per hour and often lasts several hours. In between visits, there are often sick calls where her treatment needs to be revised.

Of our three children, Teagan takes the most medications and supplements (30 different). Because she is unable to swallow pills or capsules, everything has to be mixed, compounded and made into liquid forms. The LymeLight grant has made it possible for us to continue these necessary supplements for Teagan and add more as needed. Teagan may also need IVig treatment if she continues to show no progress. In addition, all of our children require a special diet which puts further strain on our finances.

We are hopeful that under her LLMD’s care, Teagan will eventually get the life she deserves as an 8-year-old. We are grateful to the LymeLight Foundation for all you have done for our family.

2017 Update on Teagan:
The past 3 years have showed a slow progression for Teagan. We began to homeschool her, which removed many of the daily stressors her Lyme body couldn’t handle. The reduction in germ exposure has also helped her improve. She slowly learned to socialize and form lasting bonds with other kids. She also began martial arts. She is currently a brown belt with only one year away from her black belt. We are in a stand still with her treatment, and even though we’ve used all of her LymeLight funds, we have also gained a lot of knowledge to empower us to keep fighting for her recovery.