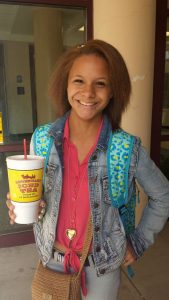 Five years ago I had no idea that our family’s life was getting ready to be turned upside down – especially our 15-year-old daughter’s life. What started out as Quiana experiencing dizzy spells and headaches would, in the end, lead to something lurking in her body—something that would ultimately become debilitating, life threatening, and become her, and our family’s, worst enemy.
Five years and countless doctors later we have finally put an end to Quiana’s medical mystery as we now know she has Lyme disease and PANDAS. Every day she experienced unbearable pain and physical symptoms that completely halted her young life as she once knew it. Quiana’s daily life now consisted of contending with devastating symptoms associated with the disease: severe, sharp, stabbing pains in her head; dizziness; heart palpitations; numbness in her extremities; seizures; fainting spells; air hunger; auditory and visual hallucinations; moments of blindness; ringing in her ears; painful knots on her head that moved around; hair loss; fatigue; nausea; lack of tolerance to high temperatures; severe joint pain; and short-term memory loss.
Lyme disease has robbed our daughter of her life and her ability to engage in normal teenage activities like learning how to drive, attending school on a regular basis and just having any sense of normalcy. Despite this, every day Quiana wakes up with a smile on her face. She pushes through the pain in order to spend a few hours trying to be like other kids her age going to school. She does all this only to come home and collapse from exhaustion, often unable to get out of bed the rest of the day.

Since finding out Quiana has Lyme disease we have been able to find an AMAZING LLMD, who has worked with Quiana to tackle the numerous issues that the Lyme and co-infections have caused. It has been a struggle for our entire family as my husband is the only one who works while I take care of Quiana and our four other children. The strain of medical bills and going in debt to pay for Quiana’s lifesaving treatment has taken its toll on our family, mentally and physically.

When we first received news that Quiana had been chosen to be a grant recipient the feeling was so very overwhelming, that all we could do is laugh and cry. Finally, we had some kind of relief and help, finally some new doors would be open for Quiana. This past June, Quiana’s doctor declared she was in remission. Oh what a happy happy day for all of us!!! All of her symptoms where completely gone and she was finally feeling like a normal teenager should. Unfortunately, this feeling would be short lived as Quiana relapsed a few weeks ago and started having seizures and headaches again – this time becoming paralyzed from the waist down for a brief period of time. This hit everyone in our family extremely hard especially Quiana, it left her feeling hopeless. However, in spite of this feeling she refuses to give up and tells us every day that all she wants to do is get better.

Since receiving her grant money we have been able to pay for treatments, supplements and add essential oils into her regimen to try to help her fight and win this tantalizing battle. We are hoping to use some of her grant money to have a spec scan done of her brain and maybe even renting the hyperbaric chamber to add to her current treatments. Receiving her grant money has lifted one weight off of our shoulders by giving us the security of knowing that we can pay for the treatment she needs. Now that she has relapsed she will begin antibiotic therapy again in hopes that she will go back into remission. We are taking this process day by day as it is s all that we can do at this point. I can’t even begin to describe how her grant funds has helped give her the opportunity to see one of the top Lyme doctors. I know she is in great hands and look forward to keeping the LymeLight Foundation updated on how she is doing. From Quiana and our entire family we just want to say thank you, thank you so so much for helping our daughter the way that you have!

UPDATE – Since writing this story 3 years ago we are happy to report that Quiana is in full remission and is attending University Online for her Bachelor of Science in Production and Broadcasting. She hopes to one day work in the entertainment industry, so stay on the lookout for her in the years to come. Again, thank you LymeLight Foundation for opening doors of opportunity during her medical journey.