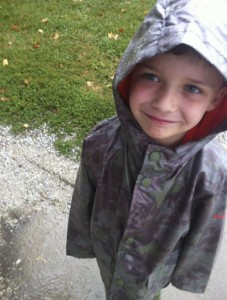 My husband and I have realized, retrospectively, that I started feeling generally unwell as much as a year before we discovered we were pregnant with Isaac (Ike), who is 5 now, but the pregnancy became my primary condition and concern, and we didn’t realize there was an underlying illness.

It was really difficult! There were no obvious complications like hypertension or gestational diabetes but I felt as though I wouldn’t survive it, and I certainly never recovered from it. My symptoms began in earnest after Ike was born, with recurring sinus infections for which no one could pinpoint a cause.

After a year or so, they stopped as inexplicably as they had started, but I was exhausted, feverish, and had a sore throat, body aches…I felt as though I had the flu all the time! My hair fell out, one side of my face collapsed, and my head hurt relentlessly. I went to numerous doctors and had tests run. I was told repeatedly that there was nothing remarkable in my blood work. I didn’t have cancer or any of the markers for autoimmune disease, my thyroid looked ok.

I was given antidepressants and sent home. I grew increasingly ill and spent the summer of 2012 in bed. We realized we had to try again to seek a diagnosis, and I saw a holistic nurse practitioner who asked me if I had ever been tested for Lyme disease. When my results came back positive (even by the most rigid standards), we came to the horrible realization that we would have to test Ike! We soon discovered that he was infected with Lyme disease, Bartonella, and a protozoa that has only recently been identified as a new species, of which not much is known.

At 4 years old, Ike had been sick his whole life, and we had missed all the signs! Of course he had symptoms, but we hadn’t picked up on them, as such. Ike had had terrible reflux until he was almost a year old. Apparently this is very common among babies born with Lyme, but it’s also not uncommon for otherwise healthy babies. He has always been pale, but people in my family are fair skinned! As for how he felt, he couldn’t-or didn’t-tell us because he had nothing to compare it to. Feeling awful has been the norm for Ike.

By the time we were diagnosed, Ike and I both were in the late stages of the disease. We were told in the beginning that children respond well to treatment and begin to feel better quickly, but to our vast disappointment, it hasn’t held true. For whatever reason, Ike’s particular pathology is complicated and treatment resistant.

He has been working with our LLMD for more than a year and a half, and continues to struggle. He takes several antibiotics and vitamins along with supplements to fight inflammation, help with sleep, and boost immunity. He has constant headaches and lacks energy. Often he is grouchy and just wants to lie around. It’s difficult to plan anything, as we can’t predict how he will feel, and most often the money for family outings has already gone toward our medical expenses.

Our daily life consists mainly of managing our treatment: earning the money for testing and to buy medications; ordering and having them shipped or picking them up, and taking them; with or without food, an hour before or two hours after one another, as soon as we wake up and before we go to bed. Visits to our doctor can cost as much as $1200- out of pocket- every four to six weeks, and it seems we are always at the pharmacy or on the phone with a healthcare professional.

My husband is a laborer and I do some administrative work for a friend’s business when I am well enough, but Lyme disease has been financially devastating for our family.

Ike and I are in very good hands with with our doctor, and despite our challenges, we have been very lucky to escape many of the serious neurological symptoms that can develop when Lyme disease and co-infections go untreated. Ike is able to attend Kindergarten this year, and rides the bus to school. It’s exhausting for him but he’s a bright, sweet boy who likes to make
friends and loves to learn!

We continue to hope that we will cure Ike and that he will eventually lead a normal life. We are very grateful for the support of our family and community, and especially for the help we have received from The LymeLight Foundation. This is where words fail me: knowing what this grant has done for our family, I can only imagine what it has done for others who are undertaking the process of healing from Lyme disease.