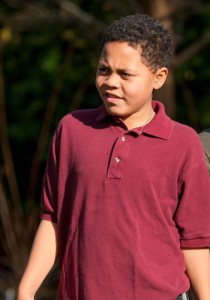 Marlin was born on March 28, 2001. My pregnancy was normal and I felt healthy throughout, however, the birthing process and first few days of Marlin’s life did not come without complications. During delivery, Marlin was pressed up against the umbilical cord and upon birth, he had an abnormal heartbeat, low blood sugar, he was jaundiced, and didn’t utter a sound. Marlin spent his first 4 days of life in NICU, where he was tested for a wide range of ailments and conditions. Thankfully, all tests were negative.

As a baby, Marlin continued to grow and reach milestones, until he was approximately 18 months. At 18 months, Marlin began to lose his speech. He began to throw tantrums, seek isolation, and he became increasingly difficult to feed. After numerous doctor appointments, at age 2.5 he was diagnosed with Autism. More than one doctor told me he would never live independently, and that the best I could do was find him a “good school for Autistic children”. At that time, we were devastated and mourned the child that we lost. But then I picked myself up and immersed myself in learning how to make his life the best it could be.

We were blessed to find a good DAN (Defeat Autism Now) doctor who explained to me the brain and gut connection. We began a gluten and casein free diet, tested him for vitamin deficiencies and began to give him vitamins and supplements. As his body grew stronger, he started to make slow progress, and even began to regain language.

We focused on treating each symptom, instead of just assuming that every ailment was due to his Autism. While treating this way, we continued to see progress. During the next couple of years, we took Marlin to see a Gastroenterologist, Endocrinologist, Neurologist, Allergist, and a Geneticist. He continued to attend his school for children with Autism, intense daily behavioral therapy, speech therapy and occupational therapy. We tried to cover all bases that we could.

At the age of 7, Marlin began to have head pain, migraines and body aches. Yet again, many of his doctors said this was due to his Autism and lack of language and the stress that this caused. But his symptoms progressed, and he began to have absence seizures. He underwent testing, but EEG’s came back inconclusive. As his neurological symptoms worsened, he displayed aggressive behavior and frustration, and looked to me to fix what was ailing him. As his mother, my gut told me that there was something else wrong, and I had to find out what it was.

In October 2010, we found a doctor who took a further look at Marlin, and he was finally diagnosed with Lyme Disease and Co-infections. Since beginning his Lyme Disease protocol, his headaches are non- existent, he is a happier boy, language has increased, and he is in a regulated state that allows him to openly engage in the world around him. It is amazing.

After about a year into Lyme treatment, given all of the previous years of medical, educational and therapeutic expenses incurred as well as my inability to work due to caring for Marlin, we nearly lost our house to foreclosure. At this time, we were faced with the difficult decision to limit Marlin’s Lyme treatment, and faced possibly discontinuing Lyme treatment altogether.

The grant Marlin has received from the LymeLight Foundation has blessed us with the funds to continue to pursue Marlin’s treatment for Lyme. There is no greater gift, particularly at Christmas for a mother of a child who is suffering, than to know that he will continue to receive the care that he needs.