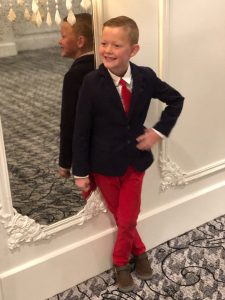 Camden – Nothing Short of a Miracle

Camden was bitten at 22 months old and immediately spiked a fever, had a seizure and stopped breathing. Two days after his seizure, he developed a full body rash and golf ball-sized lymph nodes on his neck so large, he was unable to turn his head.

Before Camden had been bitten, he was your typical toddler, hitting all his developmental milestones. After his transmission, he was a shell of his former self. He could no longer swallow any solid foods, process speech/language, or speak. As his mom, I had to leave my career to become his full-time caregiver. We saw over 20 doctors over the next four years, where Camden was diagnosed with a variety of different issues, like acquired brain injury, cognitive delay, speech delay, processing disorder, arthritis, and growing pains.

The developmental delays were attributed to the lack of oxygen during his seizure as a toddler. Camden was seeing every kind of developmental therapist that had ever been recommended, all the while making very little progress in a span of four years. In 2016 at the age of five, Camden abruptly took a turn for the worse. He stopped walking, constantly screamed in pain that his feet hurt and developed night sweats that would leave a ring of sweat on his sheets anytime he went down for a nap.

By accident, we found a Lyme-literate physician, who ordered Igenex testing that came back positive for Lyme and Babesia. Camden’s Lyme-literate physician referred the family to a specialist, who would be best to treat Camden’s case. The thought of financial expenses that would be required to travel to see a world-renowned pediatric Lyme specialist and being able to afford additional testing and treatments, was daunting to say the least.

I stumbled across LymeLight Foundation while doing an internet search for Pediatric Lyme Disease Stories. I submitted an application and supporting documents, not actually thinking that Camden would ever be awarded a grant. Receiving an award seemed too good to be true.

We made our way from FL to CT to see the specialist who recommended starting hyperbaric oxygen therapy in conjunction with antibiotic treatment. Our private insurance refused to cover hyperbaric oxygen therapy. Around that time, Camden’s grant award letter arrived and we were able to purchase the hyperbaric unit and pay for additional visits to see the specialist. Camden is still in treatment but his progress has been nothing short of a miracle. He is no longer in constant pain and continues to make developmental progress.

Our family cannot thank LymeLight enough for the life-saving grant they supplied our son.