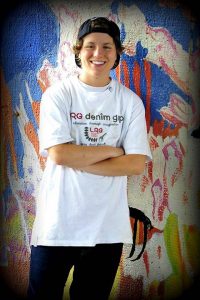 It was three years of being misdiagnosed. By the end of those three years, I was not the cheerful, lively person I once was. I became frail and timid; losing a little part of me every time I went into the doctors and given no answers. I became silent, ignoring what my body was telling me because doctors could not find anything more than a vitamin D deficiency, and starting questioning my mental stability.

In August of 2013, when I was 17 years old, I went to a Young Life Camp in British Columbia, Canada. A few days into the program I got a strange looking bite on my leg that kept growing in size and took months to finally heal. I thought nothing of it, as I always react poorly to bug bites. Some spit and a band-aid later I never gave it a second thought. I was extremely active. I loved running and playing sports. I was very sociable and loved life. My earliest symptom that I recall is when I started developing horrible knee pain. I had to quit my senior year of high school soccer because my knees hurt so bad. I started developing “tumor-like” lumps all over my body, and was screened for cancer. Thankfully, it was negative, but I did turn out positive for an ANA test. This was the first odd sign that something was attacking my body. The doctor could only suggest knee braces to correct my form (Yes, like Forest Gump) and said the lumps are probably just me noticing the details about my body (what?). Many symptoms later, and many doctors later (Physician(s), Gastroenterologist, Rheumatologist, Physical Therapists, Naturopath(s)) I completely lost hope. It was my mom who ultimately asked me, “Do you remember ever getting bit at all? Having a rash ever?”

It was that instant I knew it was from Canada. I quickly became educated on Lyme disease, and something inside me told me I finally found my answer. I found a Lyme-literate doctor and started being treated. In a matter of two months I started feeling better, but I quickly used up all my hard earned savings and school financial aid to cover my medical costs. I felt so discouraged. I desperately wanted to get my life back, but knew with time I would not be able to afford it.

That is when LymeLight Foundation stepped in. I prayed that I would get this grant so that I can become the person I used to be. The day they awarded me the grant I will never forget. I am so fortunate to be able to continue my treatment towards getting my life back. LymeLight has given me the courage to fight this disease. They have shown me that people out there care and want you to thrive. I will always be grateful.

I have learned many lessons during my journey with Lyme disease. I discovered that I am not a frail and timid individual, but I am a fighter with courage. I’ve learned to listen to my body and speak up when needed. Although I have a chronic disease, it does not define me, and will no longer control me. Those who have Lyme have overcome so many barriers, and as a result, I have found that we are some of the strongest people alive.

It’s because of the LymeLight Foundation why I am able to continue fighting,