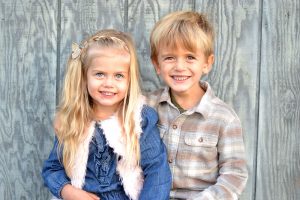 Benjamin and Adeline – Heartbreak to Hope

“Daddy, do you want to buy this ring for Adeline?” Benjamin said holding up a party favor left over from his fifth birthday party. “I don’t know Benjamin. I don’t think I have any money for rings right now,” I replied, distracted since I was trying to get the kitchen cleaned up. “Well I can give you some money from my money chest,” Benjamin said referring to the little box he had with spare coins he had collected. “If I bought the ring, what would you do with the money?” I asked. Benjamin immediately replied, “I want to give it to you and Mommy to help pay for the tick bite.”

My heart felt like it was broken into a million pieces as my husband retold this story to me that day. About four months prior to Benjamin’s 5th birthday he had been bitten by a tick that carried Lyme disease. While getting treatment for him, we discovered that I also had Chronic Lyme disease, which had been causing numerous medical issues for years. A few months later both our 2- year old daughter Adeline and my husband received the diagnosis of Lyme as well.

While, we grieved our children’s Lyme diagnosis, we were not completely surprised. It turns out Benjamin had gestational Lyme and his bite was a second exposure. Starting at about three weeks old until he was about seven months, he screamed inconsolably and would only sleep in 45 min increments. Being first time parents we had no idea. The doctors thought he just had really bad reflux. As he grew numerous sensory issues began to show up and his sleeping habits continued to be a challenge. I was always asking myself, “What is going on with my boy?” I would go round and round but no one seemed to be able to help answer that question. After our family’s diagnosis there was a small sense of relief but at the same time we were devastated as we wondered how we would possibly afford to pay for not only one, but all four of us, to get treatment. Our family was already barely making it from paycheck to paycheck as it was.

Six months after Lyme became a known part of our world, we realized the house we were renting had a mold issue. Another big loss as we were forced to sell most of our belongings and move out of a community we loved since we couldn’t afford to rent or buy anywhere in the city. Despite all of this we have seen God provide for us in amazing ways over the past two years. Generous friends and family have helped us, but always the question of how could we pay for our next set of doctor visits loomed. We are so grateful for LymeLight Foundation and their generosity in allowing us to continue treating our sweet children.

The journey feels long and hard but little by little we are seeing improvements. Adeline has fewer noticeable symptoms and Benjamin continues to have different but less severe neurological impacts. As their mother, I long for them to live full lives, free from needle pokes and long protocols. We believe there will be complete healing as we move forward using the grant money to continue treatment. We are grateful for our knowledgeable doctor, the support from family and friends, and the hope that LymeLight has given us to continue on this journey.