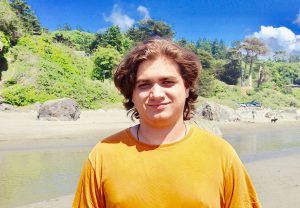 My name is Kanen Rose and I am 19 years old. The following is my Lyme story as best as I can recall.

I was first diagnosed with Lyme disease in fourth grade. I had just started my first year in Little League and after a long day of practice we went to the video store to check out some movies for a relaxing evening. Still energetic I was balancing and walking along a four-foot brick wall outside the video store. When I jumped down however, to my surprise my ankles suddenly gave out. It hurt a lot for some reason, but we thought nothing of it and went home for some good movie watching. As my mother tells me however, when I woke up it was a different story. I called her into my room the next morning. I couldn’t walk. To do so was excruciating and my feet were throbbing and in pain. I stayed home from school that day and my parents assumed it was due to all that running and then jumping down from the wall. Three weeks later, and finally in a wheel chair, I still couldn’t walk on my feet. We were in the pediatrician’s office yet again trying to figure out what was going on. Numerous tests and x-rays showed nothing. The doctor apparently took my mother aside and asked her if she thought I was faking it. I can tell you I wasn’t. I had to quit baseball, I couldn’t play at school, and kids were teasing me because I looked fine. I became sullen and withdrawn and we still had no answers.

About a month later, my mother happened to be diagnosed with Lyme disease by blood tests and a new doctor that she had gone to see. She had been sick for several years, but was told she had depression and fibromyalgia, and that she was “fine” otherwise. She had a realization after the fact and took me to see the new doctor. To make a long story short, after a few blood tests, I too was diagnosed with Lyme disease. I also tested positive for Babesia, Erlichia, and mycoplasma infections. As things turned out, my sister Emma, and father Kirk, would also prove to be sick with Lyme over the next few months.

It was 2007 and we were living in Humboldt County, California at the time. Our new doctor put us all on antibiotics and we began our long arduous journey of healing from Lyme disease. Looking back over the last ten years is a bit of a blur. None of us are well yet. While we are doing much better than those first few years we are still struggling with our illnesses.

Under the care our new doctor, I was put on heavy antibiotics and anti-malaria medication to treat the Babesia that was causing horrible night sweats. I was finally able to walk again but baseball was no longer an option. I was in constant pain and terribly fatigued. I felt like I had the flu all of the time. After about six months I apparently started to feel better and we thought I was finally well. It was at this time that my father started a new job in Seattle, Washington. We moved to Bainbridge Island just outside of Seattle and thought we had licked Lyme.

The transition was… hard on me. I transferred into middle school at the end of fifth grade and had a difficult time fitting in. I won’t go into too much detail about that year but I got horribly depressed and started having stomach aches every day. I was also in constant pain, the same pain that is still with me today. As a child, I just assumed pain was normal and didn’t mention it to anyone. My mother took me to see a specialist (Naturopath) in the off chance I was still sick. We did a lot of testing on my sister, my mother, and me and discovered that we were all still really sick with Lyme.

Under the care of our primary care doctor and our Lyme Naturopath specialist my sister and I were both put on picc lines for over a year and a half so that we could get the heavy antibiotics that were necessary to fight this illness without compromising our GI tracts. Both of us were also showing cognitive impairments by then so IV was the way to go. My mother however stopped her own treatment as she had hit a plateau and we couldn’t financially afford to keep everyone in treatment. I also started seeing a Lyme literate psychiatrist as I continued to have serious, ongoing depression.

By 7th grade, I seemed to have my life back. I went off treatment and became an athlete again. I was doing great in school and my social life was fulfilling. I went out for Crew and was on the rowing team. However, during my time on Crew, whenever I pushed myself, which I did so often, I found something was always holding me back. Pain was what slowed me down, not muscle fatigue. I would come to realize later in my life that the excruciating pain that would always cause me to hit a wall in my training wasn’t at all normal. By 8th grade, I took a turn for the worse. Major depression set in as well as a debilitating fatigue, a day didn’t pass that I didn’t contemplate suicide. I changed from a student who never missed a day of class to a borderline truant. I got tested again for Lyme and I was very positive so we were back fighting it again. I missed a lot of school but was able to graduate middle school due to sheer will power.

After a summer of rest, I thought I was ready to take on high school. I thought I had beat Lyme back again. I was now on the high school rowing team, getting great grades, and even had a girlfriend. However, all of that came to a halt when I became very ill, over night it seemed. It seems whenever I push myself physically, Lyme disease raises its ugly head. Depressed and sicker than ever, I missed ¾ of my freshman year. I went back on a picc line for another year and a half of antibiotics and oodles of supplements. A 504 plan was put in place so that I could pass my classes and I persevered with the unwavering support of my family and teachers. I stayed in treatment until the end of 11th grade, however, at this point we felt we needed a new perspective for both my sister and me but finding a new LLMD in our area proved to be really hard. We stayed in our doctors’ care but took a break from antibiotics for about a year. We were better but not well. In 12th grade, I took college courses at an accelerated pace so that I could graduate from high school on time with my peers, all the while being sick and very fatigued.

Missing most days of school, I essentially resigned myself to being extremely tired, in pain, and feeling flu like more often than not. However, I still wanted to make the most of my situation. Using my time alone I began to take a deeper interest in my studies. I decided I would work through my depression with thought and found my own philosophies concerning God and the purpose of life. I even began writing a novel, and I have been working on it for over three years now. I truly believe my experience in dealing with Lyme at my worst was a pivotal moment in my life and through its hardship I matured greatly as an individual. I made the most of my situation and graduated from high school on time and with honors.

Due to my illness, I chose to delay college by a year to work on my health. I also took this time to work on my novel, and to work at a part-time job to save what little money I could to help ease the financial burden on my family. In January 2016, through our local doctor’s recommendation, we began seeing our new LLMD in San Francisco. We have appointments every two to four months with phone consultations in between. We are seeing wonderful progress under our new LLMD’s care.

My first year at college was an amazing success! I stayed on top of my illness, and though it impacted me every day, I was able to achieve the academic and social goals I set for myself during my first year. I will return to college again this August. In order for me to be successful I must continue seeing my LLMD and stay on a strict schedule of medications, supplements, diet and exercise. I am not out of the woods yet but I am getting better each day.

The financial burden is extreme, and my family has gone into massive debt in order to pay for the medical treatment for our family over the past ten years. We have refinanced our home, owe a lot of money to family members, and have racked up credit card debt. My mother and father are forgoing treatment so that my sister and I might benefit and hopefully one day be well.

Receiving a medical grant from Lyme Light Foundation to help pay for my medical expenses has been life changing for my family and me. It has helped to ensure that my sister and I can both continue to receive the treatment we need so that we might one day be Lyme free or at the very least be able to live full lives in spite of Lyme disease. It’s an all or nothing deal for me. I must also succeed in college in order to eventually shoulder my own medical expenses and take some of the burden off my parents. Beyond that, it is my dream to not only succeed in college but to excel in it, so that one day, using my education, I can work at curing others of diseases such as Lyme through scientific research. As of now I plan to major in Biochemistry. I want to help those who need to go through the same hardships I have, hoping to keep their hardships to a minimum. I can’t thank LymeLight Foundation enough for helping me. I will one day, pay it forward!