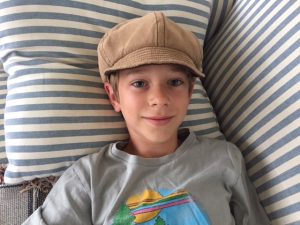 Arlo’s story begins like many children born with Lyme disease and co-infections. At birth Arlo appeared healthy and strong. However, not long after birth, he began to get sick quite often. He experienced extremely high fevers, most of the time they would reach over 104 degrees. As a first time mom and having been very sick my whole childhood, I thought this was somewhat normal. The doctors did not seem concerned, stating that children often get fevers that high. But then there were other things. He had croup and swollen tonsils. Often times his glands were so swollen, he could not move his head from side to side. All of these symptoms did not seem normal, but I wanted to trust his doctor.

At the age of one, Arlo began receiving his childhood vaccinations. His third vaccine left him unable to walk or to move his head for three days. He then broke out in two blistery rashes. The hospital said that his immune system had been compromised and he shouldn’t get any more vaccines. He seemed to get even worse after this. The high fevers continued, along with constant swollen lymph nodes in his neck, swollen tonsils, rashes, eye problems, and teeth problems. By the time he was two years old he was acting a little different than other kids his age. He was very smart, but very over active. He began displaying OCD behaviors. I had been a teacher for over ten years at this point and had worked primarily with boys who had been kicked out of public schools for various reasons, so I was very familiar with “labels” such as, OCD, ADHD, ODD, etc. Arlo began to show some signs of these tendencies, along with taking much longer naps than other kids, and he was sick much more often. He was still getting fevers over 104, stiff necks, and sore throats. His eyes were blood shot on a regular basis, and he seemed agitated much of the time. He became very sensitive to sounds. He could not handle loud music or clapping. He couldn’t be in a room with people singing. People treated me as an overly worried first time mom, but I kept following my intuition. Something wasn’t right.

At age three, creative and curious, Arlo began pre-school. However, with school came a lot of anxiety and stomachaches. He looked tired a lot, and we would often have to take deep breaths together before entering school. He could not participate in anything that was too loud, and he continued to get sick. Even though he liked school, it made him anxious and he seemed more serious than he should be at three years old. He was angry or sad much of the time, and this worried me. He made it through his first year and into the summer. I wanted to teach him activities that most boys at the age of four love to do. But Arlo had always been hesitant physically. He was nervous about slides and swings, and had a lot of fear around learning to ride his bike or learning to swim. So we took all those activities slowly, not pushing him into them. Even now, at seven years old, he still won’t put his head under water and has no desire to learn to ride his bike.

During these years, and for several years prior, I had also been to many doctors trying to figure out what was wrong with me. I had struggled with parasites and had been diagnosed with numerous food allergies, but still no one could nail down what was wrong. Arlo was about to enter Kindergarten and he still had a lot of anxiety and was complaining daily of stomachaches and headaches. I thought it didn’t seem right, I knew he shouldn’t be experiencing all of these symptoms so frequently. I continued to bring him to doctors, but no one had any explanation. With both of us not feeling well, I started to wonder about our environment… mold, water etc. We sold our house and moved to another. I was pregnant at this time and not long after gave birth to Rowan.

After this I got much sicker and Arlo was still battling all of his symptoms. When I went back to my doctor, unable to lift my arm or move my hip, they did a Lyme test. I had been tested years prior, but it was not very reliable testing back then. So now with better testing, it came back positive. It showed that I had been infected for quite some time. I remember the exact moment it all came together like a light bulb going off in my head. As I went home to Arlo who was sick on the couch, his eyes all red and very little life in him, I knew then what was wrong with him, Arlo had Lyme disease. After four and a half years of his life spent struggling with symptoms and going down hill every day, I finally knew what we were dealing with, what no doctor could pinpoint or explain. All of the sudden it didn’t matter that I was dealing with the same issues, what mattered was getting treatment for Arlo right away.
Arlo was tested for Lyme and the test came back positive. Based on the testing and symptoms, our doctor concluded that he was born with Lyme that he contracted from me. Being that he was so young, he could not take the standard Lyme antibiotic, and he is allergic to others. Plus we were looking at Candida, Dysbiosis and other digestion issues that needed to be treated. As a certified herbalist and someone who does a lot of research, I knew that even if he could take antibiotics, they were not the best choice for him. So we put him on the Cowden protocol. He also had a food allergy test which came back with many foods to avoid. As soon as Arlo started the Cowden protocol with Samento and Banderol, we began to see improvements. He was not getting sick as often, and even his anxiety decreased a bit. However, he did continue with many other symptoms and I knew it could take years to see a big difference.

After adding the herbs, homeopathy, and essential oils, it became clear that neither Arlo nor I detoxed well as we both became pretty sick trying to get better. It seemed like Arlo was herxing all the time, but we were also seeing some improvements. I connected with people whose children had Lyme, continued to research Lyme and wrote it all down in a notebook. In speaking with his doctor, I began to feel like I knew more than she did, and of course, I was much more proactive. It also became clear that the medicines, travel, doctors, and extra detoxing were all going to cost a lot of money that we didn’t have, especially since I was getting treatment too. My husband also had Lyme, but since he had the least symptoms, we postponed treatment for him.

Being with Arlo was sometimes like riding a roller coaster. His emotions and anger were all over the place…different every minute. However, after a few months of treatment, Arlo was making more progress. He seemed sick less often and his fevers were normal instead of extremely high. His eyes began to brighten and his anxiety seem to lessen. We were on our way. However shortly thereafter Arlo started responding not as favorably to the various herbs and tinctures and it seemed like we were at a standstill. We began to try even more treatments… detoxing, essential oils, clay baths, castor packs, you name it. It all seemed to help, even if just a small amount.

I began to learn about MTHFR gene mutations. I learned more about certain triggers and blocked detox pathways. Two years into treatment, I asked our doctor to test us for MTHFR gene mutations. So she tested us, and sure enough we were positive. This placed more restrictions on us and made our situation even more overwhelming.

Arlo had made it through kindergarten with a lot of anxiety, stomach pains and missed days along the way. He was six and entering first grade. I wanted him to lead a normal life and to try school. However, it has been a rocky road and he is now asking to be home-schooled next year. Not sure if that is possible or not, but it breaks my heart that school has been so hard for him his first two years.

I have been unable to work full time as I struggled with many symptoms of my own. Arlo’s little brother tested positive for Lyme at age one. Although he was healthier than Arlo, the Lyme symptoms were beginning to show. We were starting to lose hope, and the overwhelming reality of all of us needing treatment was making it hard to stay positive. We really didn’t know what we were going to do. I felt guilty for passing this awful disease to both of my children in utero, and angry at the lack of knowledge out there. It seemed like a struggle that takes more energy than we had!

Then one day, I saw a post on Facebook in a Lyme group, mentioning the LymeLight Foundation. I read about a women who had gotten help for her son, and what a difference it had made. I felt a restored hope in humanity just knowing there was a place acknowledging this struggle that so many people and families are experiencing. I applied for a grant for Arlo, hoping for the best, but knowing how many people there are just like us who need help. After a few months, we got the notice that Arlo was granted some money for treatment. I cried like a baby in that moment…not just for Arlo, but also to see that there IS kindness out there, there are people doing good things, there is hope. I’m crying now just writing about it. It was really hard to believe at first that this help had come for him. We began to use the grant money for parasite protocols, detox medicines, and have also begun various treatments that are more gentle but expensive. Being able to do these things has made a big difference in Arlo’s life and ours. He is showing the most improvement since receiving the grant than he was for the two years prior. His eyes are brighter and his anxiety continues to lessen. He is more active, and less sad and emotional. He has started taking Martial Arts and becoming stronger. I can make an appointment for him when he needs it, instead of waiting until we can afford it. We were able to get some testing that was needed, and make appointments with doctors we never would have been able to see otherwise. He continues to improve. It is still a long road, and we still go day by day, but I know that without the help of The Lymelight Foundation, Arlo would not be showing nearly as much improvement. With their help, we see hope and possibilities for Arlo, we see the true Arlo shining through. This help and opportunity has made all the difference for our family. If we didn’t live across the country, I would personally hug each and every person who takes the time and effort to make the Lymelight Foundation possible. Thank You!! Thank You!!