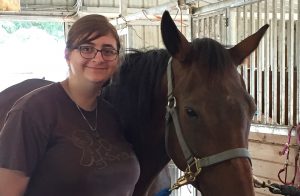 My Name is Emma Rose, I’m 18 years old and this is my story. I grew up in Humboldt County, California surrounded by the biggest, and most beautiful trees I’ve ever seen. Playing and swimming at the beach with my brother, I’d try to be just like him when it came to pretty much everything. I remember calling my dad before bed every night when he was deployed in the military and sharing silly knock-knock jokes; and reading I-Spy books when he was home. I remember the way I always felt at home in my mom’s arms, the warmth and caring that was always there; and covering myself in mud just so she’d give me a bath. I remember all the fun days with my great grandma and doing art with my mom and aunt. These were the days that at the time, I never realized would end, but we all grow up and learn the hardships of life.

Life has been hard. I wish I could go back to my younger days. The days when there were no worries and no work; when I ran and played all day. Those days lasted shorter for me than they did for my friends. My childhood was cut short by a hidden monster.

I was 8 years old when it started, first with my stomach and then moving on to attack my mind and causing pain elsewhere in my body. The memories of the past years of my life are missing most of the events that occurred. But before it found me, the monster attacked my mom and then my older brother. I didn’t know at the time that it was the reason my mom was bedridden for most of my childhood, nor did I know it was why my brother lost his ability to walk for some time. It wasn’t until 2007 that we learned the identity of this monster; Lyme disease.

After several months of oral antibiotics my symptoms went away and I was doing well in school again; my brother was doing better too. We thought we were out of the woods. Little did we know that the fight had just begun. A year later, in 2008 my dad got a new job in Seattle and we all moved to Bainbridge Island, Washington. When we moved we went a few months without medical treatment because we didn’t have a doctor and we thought my brother and I were healthy. Mom was able to find a Lyme literate naturopath in Seattle, who treated Lyme and it’s co-infections. Soon, my brother relapsed and required treatment again. But it was a few years before I fell ill again.

I was 11 years old when I relapsed. I was doing fine until I was just starting 6th grade at a small private school. My mom’s doctor treated me for Lyme and Babesia again. I got worse with the treatment. My stomach couldn’t tolerate the oral antibiotics so I was put on a PICC line for IV antibiotics. The PICC kept me from doing one of my favorite activities, swimming. At this time I missed around 3/4th of the school year and fell into the deep, dark pit known as depression. I didn’t have any friends at school, because everyone already had their friends established. The kids weren’t mean to me, they were all polite, but they didn’t socialize or interact with me. The days I did make it to school I sat in a tree by myself during break or hung out with the teachers. It was during this depression that I started feeling like giving up on life, I contemplated suicide and cried myself to sleep many nights. I was lonely and tired of all the pain. I just wanted it to end, but I knew I couldn’t do that to my family. That was when Mom took me to see a psychiatrist. The psychiatrist managed my depression, severe brain fog and ADD like symptoms.

For 8th grade I went back to public school and immediately had friends again. Freshman year of high school came along; I was 13 going on 14 and feeling great. I was off my IV meds and joined my high school’s Color Guard. I absolutely loved learning the skills, dancing and performing. However, soon after my first performance I started falling behind not only in school but in life again. My school put me on a 504 plan (which is a specific set of accommodations for my condition.) This allowed me more time on assignments and tests in school. To this day, I’m still on this 504 plan. It was during this year that I went on my 3rd PICC line. A year and a half later I hit a plateau and was taken off my antibiotics for the summer.
It wasn’t until Junior year of high school that I relapsed and became really sick again and my depression got worse. I started having these unexplained episodes of falling down. I called them my spontaneous, uncontrollable, rag-dolling. I wouldn’t pass out, just crumble, and after a series of tests no one was able to find a reason. So due to a lack of a different answer we assumed it was my Lyme, which we knew for certain was back. After years of treatment from the naturopath without any real progress; my parents started looking for a different doctor, and found an LLMD in the California Bay Area. We now travel from Seattle to San Francisco every two months to our LLMD, with phone appointments in between. I was put on yet another PICC line and underwent aggressive antibiotic treatment; that PICC line lasted for a year and a half.

Medical treatments for my mom, brother and me have been financially devastating for my family. My parents refinanced our home and incurred massive personal debt. They are doing everything in their power to get my brother and me healthy and keep our family afloat. Financial help from LymeLight Foundation started in 2016 and it has been an incredible blessing. I am able to stay in treatment and get my life back. We couldn’t have made it this far without LymeLight’s help. I now have my sights focused on being able to attend college in a year or two, where I hope to study Environmental Science and help heal the environment.

Lyme disease is a part of me, but it does not define me. Life is hard, I’ve learned this through the years, but I understand that everyone has their challenges and everyone needs someone to love. The world is a beautiful place and it shapes us into who we are. We either break beneath our burdens or we stay strong. That choice is our own. My favorite quote is “The most beautiful people we have known are those who have known defeat, known suffering, known struggle, known loss, and have found their way out of the depths. These persons have an appreciation, a sensitivity, and an understanding of life that fills them with compassion, gentleness, and a deep loving concern. Beautiful people do not just happen.” ~ Isabelle Ronin (Chasing Red).