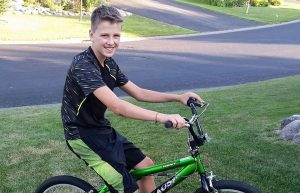 Jack – The Struggle Is Real!

The Struggle is Real! This is Jack’s saying. Jack was diagnosed with Lyme disease in June 2015. He had symptoms of headaches, severe fatigue, loss of cognitive function, anxiety, insomnia, and a host of other issues. These symptoms all seemed to appear after Jack suffered a concussion in the winter of 2012. He fell while ice fishing with his dad and has not been quite the same since.

Initially we thought his symptoms were due to his concussion. We saw several doctors and did some initial testing, however, when Jack’s mom was diagnosed with Lyme disease we decided to have Jack and his sister tested for Lyme. Both Jack and his sister tested positive for Lyme disease and we found a Lyme Literate MD. It was quite a drive to see the doctor because where we live, these doctors are few and far between. Jack’s doctor also checked his neurological issues and believes his issues do pertain to his Lyme. He started Jack on a host of supplements conducive to his Lyme, autonomic imbalances, heavy metal toxicity, insomnia, anxiety, and cognitive discrepancies.

With 3 people in our family diagnosed with Lyme, we found we were spending far beyond of our monthly income. We applied for the grant from LymeLight Foundation and were beyond grateful to find out he was awarded grant money towards his expensive treatment. It has given our family peace of mind knowing we could continue to buy the needed medicines, supplements, detoxing items recommended by his LLMD in order for Jack to try and conquer this disease.

It has not been an easy road for Jack. He has struggled greatly. He has gone from a straight A student, to one needing assistance in the school setting. He loves football and was able to played one year, but now cannot physically keep up with the demands of playing. His headaches debilitate him on some days and he has to lie in his dark bedroom.

Jack is such a caring, compassionate and a wonderful easy going 14 year old kid. Jack loves to be the class clown and to make people laugh. Making people smile and laugh puts a smile on his face. We believe this is what gets Jack through some of his roughest days. Jack yearns for the day where he is not constantly tired. He is an unbelievable fighter and never really complains, although many times you can see in his eyes he is not feeling well.

We want to graciously thank LymeLight for the grant so we can continue to allow Jack to fight! His doctor is optimistic and feels Jack will conquer this disease. Patience is a virtue and we love to see Jack happy and enjoying life, even if it’s just a trickle of it here and there. We are a close knit family, and we all fight this disease as one. Everyone pitches in when necessary and we look forward to the day when Jack can get back to all his “love of life” with the endurance he used to have. They say to fight this disease, is a marathon, not a sprint. We have learned this is very true.

Thank you again LymeLight Foundation! We are forever grateful!