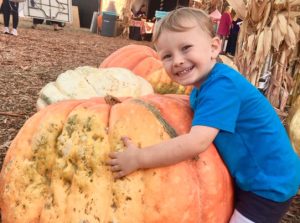 When Jameson was two months old, he developed his first cold. By the age of three months, he started developing frequent sinus and lung infections. He dropped from the 80th percentile to the 30th percentile on the growth charts. He was thin, sick for weeks on end and often appeared lethargic. When Jameson was able to talk, he would complain of headaches, leg pain and sometimes stomach pain. We sadly discovered Jameson had Lyme disease.

We were disheartened and afraid for our future. Not only did Jameson have Lyme disease, but his mom, dad, and older sister discovered they had it as well. None of our treatments were covered by insurance. All doctors’ appointments, medicine and labs were extremely expensive.

Thanks to LymeLight Foundation, Jameson was able to get continued care with a Lyme Literate Doctor, all of his medications, supplements, and blood tests were covered. This relieved so much of the stress placed on his family when they were faced with so much financial distress.

The best part of the LymeLight Foundation’s help is Jameson is having success in his recovery. He has responded very well to treatment. He is growing, playing, and has a newfound energy that he did not have before. He is back up to the 50th percentile for height and weight, he rarely gets sick and if he does it only lasts a few days. His immune system is strong and he is back to being a vibrant toddler. He is now three years old and so happy, smart, and full of energy.