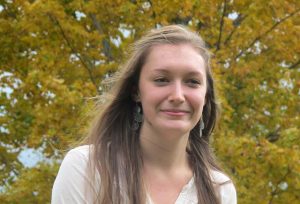 Serena – On My Way to Better Health

I grew up running around my grandparent’s dairy farm in Vermont (which has one of the highest rates of Lyme disease in the country), and then in high school running cross-country and hiking, so I could have contracted Lyme at any point in my life. I even remember when I was little, I would chase deer in our backyard. I never found a tick bite, at least that I remember, and never had a bullseye rash, but certainly had random symptoms and flu like illnesses throughout my life. The anxiety, migraines, and muscle pain I experienced didn’t slow me down, and I was able to live a very full life that I loved up until my freshman year of college.

I started college in the fall of 2014 as an Environmental Studies major. I wasn’t sure what I wanted to major in, or even that I wanted to be in college at all, but quickly fell in love with my classes and professors. I joined farming and environmental clubs, volunteered for a non-profit grilled cheese making organization (really!), hiked through the Outing Club, and also hiked on my own with my dad or whoever would go with me, and played intramural basketball and broomball (so much fun).

I found myself anxious and exhausted. I started running every day to relieve stress and the feeling of being trapped in my dorm. Living in a small city I missed nature, and running helped get me outside and closer to nature. I escaped more and more often to the bike path, or wandering or biking on my own exploring my surroundings. I was diagnosed with mono first semester, and so assumed that was why I was so tired and sick all of the time. But the mono went away, leaving panic attacks, fainting, joint pain, and “flu like illnesses” (fevers) in its place.

Being very “type A,” instead of this slowing me down, I sped up even more. Running more, doing more, working harder, and resting less. I felt more and more trapped, and started planning summer jobs to take me out of Vermont. But instead of working for a birch syrup sugaring business in Alaska, or an antique store in Maine, I ended up in the emergency room.

Yet another “flu,” but this time not one that I could bounce back from. Barely able to stay conscious long enough to sit through classes, I took a leave of absence from school and moved back home. I started bouncing from doctor to doctor, repeatedly hearing “you’re fine,” “it’s probably just anxiety,” “maybe if you had a boyfriend, you’d feel better,” and mostly, “I can’t help you.” The usual.

It took me about 20 doctors and specialists before my mom made me an appointment with my old Naturopath, who I hadn’t seen in years. She quickly diagnosed me with Lyme and Babesiosis through Igenix, and adrenal fatigue causing postural orthostatic tachycardia syndrome. I had barely heard of Lyme, much less the rest of these conditions, but the symptoms fit, and the feeling of relief at hearing a doctor say not only that they knew what was wrong with me, but that it could get better, was one of the best feelings I have ever felt. I still see my Naturopath, and am so grateful to her.

It has been a long two years since those diagnoses, and I have hit lower points than I ever knew existed. The antibiotics I went on made me much more sick, to a point where I was almost completely bedbound, with many seizures a day. Now I know that because of methylation problems and many other genetic mutations, my body has trouble detoxing and cannot tolerate such a high level of treatment. I didn’t know that then, but I finally reached a point where I said no to more antibiotics, took a leap of faith (and out of desperation) and found a Lyme literate MD who was willing to treat me without them.

I slowly began to improve on tiny doses of herbal tinctures, sometimes experiencing Herxeimer reactions on doses as low as a quarter drop. I also took a genetic test on my own, and eventually began seeing a methygenetic nutritionist who put many puzzle pieces together for me. Without his supplements, I would still be stuck on a quarter drop of bab-2 a day. Instead, I was able to begin hyperbaric oxygen therapy through my chiropractor. In the year since I have been doing it weekly, it has helped to reduce my brain fog, sinus problems, air hunger, and to begin to heal my brain from the multiple concussions I have had.

These three things, the LLMD treatments, the methylation, and the HBOT, have been the building blocks of my healing, but as always there is so much more. In addition to the work I do every day, I have the work ahead of me to address – the dislocated jaw, the parasites, and beginning treatment for Chronic Inflammatory Response syndrome due to poor genetics and biotoxins. Because of my poor response to conventional treatment (and because, for Lyme there isn’t really conventional treatment) none of these things are covered by my insurance. I have spent all of my savings, and my parents have done everything that they can for me as well.

The LymeLight grant that I received allowed me almost four months of treatment where I didn’t have to worry about where the money would come from for the next appointment, and I am so grateful for that. I was able to continue treatments, and was finally able to see a CIRS specialist and do Shoemaker testing for mold illness. Thanks to this grant, I now have valuable information to work with and a new path to go down toward more healing.

To leave this story off as a hopeful one, it has all been worth it. All of the failed treatments, all of the low points (and sometimes it seems like rock bottom is a daily thing), and all of the work – I can confidently say now that I have improved and am continuing to improve. I’m no longer completely bedbound, seizures are rare, I’m finishing up the first online class I’ve taken since I left school, and I am in the process of moving out of my parents house and into my own apartment. I am still sick, still can’t work, still experience extreme symptoms every day. But more often than not I am able to spend most of the day out of bed.

More importantly, my attitude toward life has changed. I leave a lot more room for gratitude in my life. My priorities have shifted, I have learned to let go of small things that I used to worry about. I know that not finishing school in 4 years isn’t the end of the world. I know that I need nature, sleep, detox, and good food every day before everything else. I know that I want to combine my new knowledge of health and medicine with my old love for food and the environment, which has stuck around through all of this, to help people in some way. I know that it’s okay that I don’t know exactly what that looks like yet, as long as the decisions I make every day lead me somewhere I feel good about. And mostly I know that I have so much more to learn on the way to even better health.