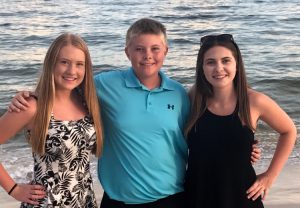 Our family is honored that LymeLight Foundation chose our children to receive the generous grants to help pay for their treatment of chronic Lyme disease. It could not have come at a better time. We have always been proud of the fact that we have not had any credit card debt, however as of last month, our American Express bill was over $24,000. This disease is not easy to diagnose, treat or pay for. We will forever be grateful to you and your donors for helping us in our great time of need.

After the birth of our first daughter, Jordan, I began to have health problems. My thyroid burned out and I began to have severe migraines. I started to have heart problems (PVC’s) and generally felt unwell. This continued with doctors treating symptoms, but no real diagnosis. Two years ago, after having two back-to-back major surgeries, my health went downhill very fast. I was having severe fatigue, headaches, joint pain, numbness in my hands feet and legs. I couldn’t sleep, I had ear and jaw pain, and terrible brain fog. I was so weak that I could not hold my hands above my head and could only stand for short periods of time. I could not remember our zip code, people’s names or help my son with his fourth-grade homework. It was very scary and hard on my whole family. My husband and I went to countless doctors for over a year and nobody was able to figure out the problem.

A Western Blot test came back negative for Lyme but a specific band showed up and led a very helpful doctor to suggest Igenex Lyme testing. The Igenex test came back CDC positive for Lyme- both IGM and IGG. The doctor knew that I have had this condition (Lyme) for a very long time and now believes that I was born with it. My Mom has been very sick with “MS” since I was a baby. They are finding spirochetes in the brains of MS patients during autopsy. Once we realized what I was dealing with, we were able to put the pieces of the puzzle together about why my children have been so sick.

We have three wonderful children Jordan (14), Morgan (13) and Dylan (10). They have had numerous health difficulties since their births but again, the doctors failed to put the full picture together. Jordan was plagued since birth with constant ear infections, pneumonia, coxsackie virus, and respiratory infections that would linger much longer than typical. At age 4, Jordan began having terrible leg pains that would wake her up at night. She would cry in pain and all we could do was rub her legs until she fell back asleep. This went on for years and the doctor was never concerned. He said they were “growing pains”.

Jordan began to get severe headaches multiple times a week that would last for days and were very hard to get rid of. This really affected her quality of life because she was constantly tired or in pain. Around the age of 11, Jordan began having fainting episodes. She passed out multiple times and ended up hitting her head hard twice. Other times, she lost her vision and hearing but didn’t pass out. The answer from her doctor was just that kids pass out sometimes. I was not satisfied with that at all. She was seen by a cardiologist at Children’s heart institute and diagnosed with POTS. We now know this is connected to Lyme. She began having joint pains that would migrate from her knees to her back. We knew almost immediately once I was diagnosed that this could possibly explain Jordan’s health history and my other children’s as well.

Morgan has the same history as Jordan without the POTS and fainting spells. Ear infections, constant headaches, joint pain, fatigue, viruses; but what plagues her the most are stomach problems. Whenever she eats, she ends up with terrible stomach pain, nausea or vomiting. She has been to the hospital twice in the last month. This disease has caused her to have multiple food allergies. We have removed dairy from her diet much to her dismay (she loves milk).

Dylan has had the same history as the girls but like Morgan without the POTS. Dylan and Morgan both had multiple sets of PE tubes because of the constant ear infections. They all were raised on antibiotics because of how sick they were. Dylan has the severe headaches many days of the week which are set off by smells and light. His feet are numb when he wakes up and his legs and knees hurt so badly that after a few hours of being up, he is in severe pain. He has ringing in his ears and bouts of dizziness. Dylan has developed a facial tic in which his eyes blink and his face twitches. He is having stomach problems as well.

My doctor suggested right away upon hearing how sick my children were to have them tested through Igenex. Jordan and Dylan were both Igenex and CDC positive for both the IGG and IGM. Morgan was Igenex positive with many positive bands but also many indeterminates, which many Lyme doctors consider positives, however, she did not meet the CDC standards. Our doctor believes because of how sick she is that she is not making the antibodies needed for the test to detect. The kids’ CD-57 test shows that their immune system is barely functioning leaving them very susceptible to picking up illnesses. Their genetic tests show that they have the inability to detox from both sides and are highly susceptible to mold. We subsequently found mold in our home we and are in the process of remediating it. Morgan’s closet had a leak from the roof causing mold on an inside wall which we could not see. Mold exposure hinders Lyme recovery. She has to sleep in her sister’s room until this process is finished. The kids have multiple co-infections of Bartonella and Babesia and probably others we have not tested for due to cost.

We had my husband tested as well because the four of us were positive. He was symptomatic with headaches, shoulder pain, ear pain, fatigue and tested CDC positive as well. Although he is in treatment, he luckily has never been as sick as the four of us. His immune system is doing a better job than ours but he still has issues to work through.

We are all in this together and are ready to put up a good fight. I have been on antibiotics for 10 months, and the kids took them for a couple of months. They did not do well on the antibiotics because of the side effects, so we recently switched to the Cowden Protocol for all of us. The cost is $285.00/person per month. This does not include the thousands of dollars of supplements, doctor bills and labs. We have been sinking so fast into debt but we have no other choice.

Our plan for the LymeLight Foundation grant money is to be able to continue the Cowden Protocol for the kids. We are also looking into other helpful alternative treatments such as essential oils, MMS, pulsed magnetic therapy, and far infrared. We are hoping that these may be easier for them to tolerate. We are planning on adding some of the supplements that the doctor recommended but we couldn’t afford. The doctor also recommends more air purifiers in our home to help the kids combat their toxin issues. We hope to make our home chemical free to help the kid’s toxicity problems. Many of their labs need to be run on a routine basis and although treatment is my number one priority, we still need these tests run to measure progress. The doctor is estimating the kids will need treatment for 1-3 years and has told us that there is always a possibility of relapse. We need to get their immune systems up and running hoping to repress the Lyme disease.

You chose three very special children to help. They are amazing kids who fight pain and fatigue daily yet do it with a smile on their faces most days. These guys have had to give up so much because of their Lyme. The poking of needles and daily medicine routine are so rough on them. They all miss an incredible amount of school yet remain straight A students. They want to feel normal like their friends and I pray for them to be free of Lyme disease so that they can become the happy healthy children that they were destined to be. The LymeLight Foundation grant is paving the way for a better future for my children and family. I will never be able to thank you enough for your hard work and thoughtfulness. You have helped us more than you will ever know. I will keep in touch and let you know how the kids are responding. We are looking forward to brighter days ahead.