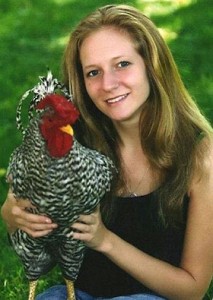 Waking up with a clear head, focused eyes and a properly beating heart is something that Krista will never take for granted again. Unlike most young adults, she’s had to fight for the simple things, things that most don’t have to give a second thought. As a teenager, Krista went from running, hiking and fencing to barely being able to rise from bed to get to school on time. She lost abilities she never expected she’d lose, including her ability to recall her very own childhood memories.

Sophomore year in high school, Krista found herself juggling a busy schedule filled with field hockey practices, homework, and hikes with her mom. She had always been athletic, and had a love for nature and the outdoors. But one morning near the end of her field hockey season, Krista’s heart began to beat irregularly. She tried to move through her morning routine, but couldn’t manage to ignore the pounding in her chest. She convinced herself to head to school despite the nagging feeling that something wasn’t right. After a few weeks and a handful of similar alarming episodes, Krista decided to see a specialist. The doctor found that Krista’s heart was indeed beating irregularly, but he chalked it up to being nothing more than a “normal” adolescent phenomenon.

Krista tried to accept the doctor’s diagnosis and continue living normally but she began to develop new symptoms. She was overcome with a heavy fatigue and flu-like symptoms that left her constantly desiring to head back to bed. In spite of this, she tried to make it through practices, but her strength continued to deteriorate to the point where she needed to come straight home from school and go to sleep. Her once admirable grades began to slip as her mind clouded and she lost her ability to cognitively function. Discouraged and concerned,Krista began to see doctors in order to get to the bottom of what was holding her back. Unfortunately, no one could provide an answer.

Krista’s determination and drive carried her through graduation, and she was accepted into college. Yet, with every step toward her goals she took a step backward in her health. Upon entering college, Krista was diagnosed with ADD. When her cognitive symptoms continued to worsen, her doctor prescribed medication to help her focus and absorb information . Unfortunately, the medication intensified her other physical symptoms making her overall heath decline . Luckily, a counselor reviewed Krista’s entire health history and realized her multitude of seemingly separate symptoms looked a lot like Lyme disease. After researching and talking to others who had experience with the chronic form of the disease, Krista was sure that the diagnosis fit.

Krista had to fight for a Western Blot test and search for a Lyme Literate Physician to interpret the results. Krista ended up in the right hands and was diagnosed with Late Stage Neurological Lyme Disease. Within weeks of receiving medication her cognitive symptoms began to improve. She could hardly believe it; after years of barely being able to get through a book, she could read again. The fog was finally beginning to lift. Krista continued to attend school and receive treatment, but soon the cost of treatment (not covered by insurance) was too high and Krista and her mother fell behind in household bills. Krista’s mother began receiving notices that her utilities would be shut off and her car insurance would be cancelled. Krista discovered LymeLight Foundation and applied for a grant, within a few months she received the news that would soon change the course of her future. She was selected to receive funds for treatment, and she would be able to begin the protocol that previously not attainable.

Krista reports that her grant funded a full 6 months of the beginning of her Lyme Disease treatment, and even allowed her to pursue both holistic and traditional treatment options. Kirsta still has a ways still to go but, her physical and cognitive symptoms continue to significantly improve. LymeLight is thrilled to hear that she even achieved straight A’s in school this semester. She has just one semester of college left before she can graduate, and once she does, she hopes to continue on to become a Naturopathic Physician. We have no doubt in our minds that she will, and that she will help many.