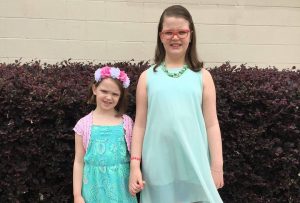 Ruth was born 11 years ago, a healthy baby girl. However, she was not a happy baby. At 10 months old she developed a cycle of sicknesses that has not ended. By the time she was 3 years old she had been on 16 rounds of antibiotics and no probiotics. Her repeat infections ranged from otitis to laryngitis, pharyngitis, bronchitis and cellulitis. At age 3, we paid a visit to Rhode Island to visit family for a couple of weeks, which is possibly where she picked up Lyme; though I have no recollection of a bite. Anyhow, upon returning home she was a “different” child; noncompliant and developing sensory issues & sleep disturbances. By age 4 1/2, Ruth developed her first of many tics following a FluMist (flu) vaccine. This tic resembled air hunger and was soon followed by multiple rounds of sporadic hiccups which the pediatrician told us were “all normal” for her age.

Five weeks after the vaccine and the eruption of those subtle tics, our daughter had a very marked overnight onset of a “supposedly hypothetical” disease that we didn’t even know existed. We were terrified as multiple symptoms such as tremors, ataxia, psychosis, loss of skills and severe separation anxiety ensued. This disease we soon discovered was P.A.N.S., better known by its previously discovered subgroup, “P.A.N.D.A.S.”. It stands for “Pediatric Acute-onset Neuropsychiatric Disorder Associated with Strep”. P.A.N.S. is the blanket description of this anomaly where scientists have now proven that not only *Strep A* antibodies, but other antibodies as well, such as Lyme disease and mycoplasma or EBV can break through the BBB (Blood Brain Barrier) and mistakenly attack the basal ganglia just as strep A can.

When P.A.N.S. happens, it is dramatic and frightening to see your child become a complete stranger overnight as their body goes into shock in every way. Now, imagine rushing to the doctor and having him tell you “Oh, it’s normal, maybe she has ADHD, but she’s too young to test. Tics come and go.” Imagine spending the next 7 years going to 6 different states and visiting countless doctors in multiple specialties trying to get help for your child, while spending thousands upon thousands of dollars. Also imagine finally getting a label/diagnosis in writing from one of *THE* top P.A.N.S. doctors in the country, only to return home to your state and being fed the line, “Oh, she has a P.A.N.S. diagnosis? It’s debatable whether it really exists, and by the way, we don’t treat it”.

Fast forward through 4 years of coping without medical care as Ruth catches one infection after another and her health continues to spiral down. Imagine waking up one day at a family camp and realizing your daughter has a new set of “moves” (tremors). Then imagine going to the beach and helplessly witnessing as she has her first of many seizures. The feeling of helplessness was completely overwhelming.

We went home and begged for an EEG from the state hospital. It was fruitless. As the seizures continued to worsen, we went to a neighboring state and asked for another longer EEG. Thanks to my research on Facebook, parents of P.A.N.S. kids were popping up everywhere saying “My kid had underlying Lyme and we didn’t know it.” This was in the back of my mind during this time, and I asked our new neurologist about it. She informed us that she didn’t really believe in P.A.N.S or chronic Lyme disease, but she wanted to help us. She proved there were seizures and put our daughter on a seizure medication which was to help with her severe mood disturbances, as well as, the seizures and sent us home.

Over the next 9 months, our daughter became a raging, attacking, delusional and psychotic child. She simply quit sleeping, unable to rest until after 3 AM in the morning. The seizures kept coming closer & closer together, triggered often by movement. Inflammation in her brain would build up periodically triggering yet another seizure.

We knew we had to do something. Step one, we fired the neurologist and weaned her off of seizure meds ourselves. As a result, we had our previous daughter back within 6 weeks! So we found a way (in the last state to ever acknowledge Lyme) to get a doctor to sign for a Lyme test. The rest is history. It was positive by PCR, because by then, she was immune deficient with an IgGs in the 300s.

Once we realized that the real problem was Lyme disease we were finally able to get Ruth to the doctor who truly began to help her, a family practitioner in another neighboring state who treats Lyme disease. We also were able to find a local functional medicine doctor to treat other underlying deficiencies in Ruth’s system. Together, these two doctors have started our daughter on a true path for healing. In the last 6 months, thanks to the LymeLight Foundation grant we received, our daughter has been able to follow the protocols of these two doctors and has been seizure free for over 6 months! Not only that, she is on round 18 of high- dose IVIG, covered by state Medicaid, thanks to the local doctor who went out on a limb and referred us in to a high profile doctor in the state hospital. This doctor normally has a 2 year waiting list, but it only took us 6 weeks to be seen by him.

Paying out of pocket for the specialty doctors with whom we have to consult and then re-consult has taken a heavy bite out of our income. We persevere to search for answers as we pulse antibiotics to keep seizures away and work to heal and maintain Ruth’s gut. Next stop: on to another doctor in another state for another little-known intervention. We are ever so grateful for the funding from LymeLight Foundation. We could not do what we do without your help! Blessings to you!